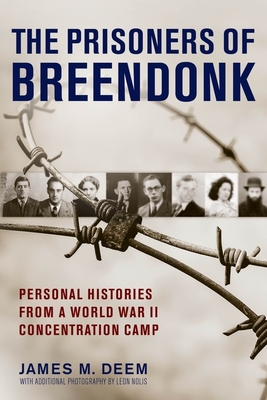 The Prisoners of Breendonk

Fort Breendonk was built in the early 1900s to protect Antwerp, Belgium, from possible German invasion. Damaged at the start of World War I, it fell into disrepair . . . until the Nazis took it over after their invasion of Belgium in 1940. Never designated an official concentration camp by the SS and instead labeled a "reception" camp where prisoners were held until they were either released or transported, Breendonk was no less brutal. About 3,600 prisoners were held there—just over half of them survived. As one prisoner put it, "I would prefer to spend nineteen months at Buchenwald than nineteen days at Breendonk."

With access to the camp and its archives and with rare photos and artwork, James M. Deem pieces together the story of the camp by telling the stories of its victims—Jews, communists, resistance fighters, and common criminals—for the first time in an English-language publication. Leon Nolis's haunting photography of the camp today accompanies the wide range of archival images.

The story of Breendonk is one you will never forget.

Praise For The Prisoners of Breendonk: Personal Histories from a World War II Concentration Camp…

*"Liberally illustrated with black-and-white photographs of the camp, its officials, and the prisoners, the book is well written and well organized."
—School Library Journal, starred review

* "A sobering study of man's inhumanity to man, and an important book that demands serious consideration and discussion."
—Booklist, starred review

"Breendonk does not share the infamy of such Nazi concentration camps as Buchenwald or Dachau, but in this insightful and revealing history, Deem rescues this Belgian prison from near obscurity and tells the stories of some of the thousands who suffered and died there. "
—Kirkus

"Deem tells a chronological history of Breendonk by weaving together dozens of personal histories...For many, Breendonk had been only the beginning, and by following a handful of prisoners to their various ends, Deem illustrates that each story had a unique trajectory."
—Horn Book Magazine

James M. Deem is the author of numerous books for young readers, including 3 NB of Julian Drew, Bodies from the Ice: Melting Glaciers and the Rediscovery of the Past, and Faces From the Past. Mr. Deem lives outside of Phoenix, Arizona.
Loading...
or support indie stores by buying on