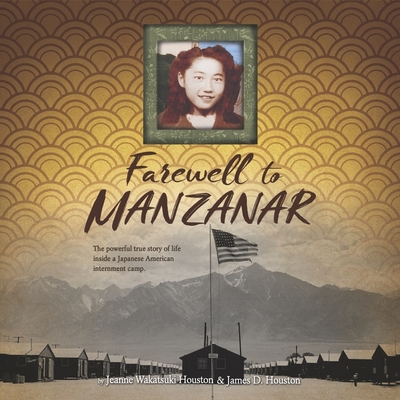 During World War II a community called Manzanar was hastily created in the high mountain desert country of California, east of the Sierras. Its purpose was to house thousands of Japanese American internees. One of the first families to arrive was the Wakatsukis, who were ordered to leave their fishing business in Long Beach and take with them only the belongings they could carry. For Jeanne Wakatsuki, a seven-year-old child, Manzanar became a way of life in which she struggled and adapted, observed and grew. For her father it was essentially the end of his life.

At age thirty-seven, Jeanne Wakatsuki Houston recalls life at Manzanar through the eyes of the child she was. She tells of her fear, confusion, and bewilderment as well as the dignity and great resourcefulness of people in oppressive and demeaning circumstances. Written with her husband, Jeanne delivers a powerful first-person account that reveals her search for the meaning of Manzanar.

Farewell to Manzanar has become a staple of curriculum in schools and on campuses across the country. Last year the San Francisco Chronicle named it one of the twentieth century’s 100 best nonfiction books from west of the Rockies.

Praise For Farewell To Manzanar…

"A poignant memoir from a Japanese American. . . . Told without bitterness, her story reflects the triumph of the human spirit during an extraordinary episode in American history." —Library Journal    "[Jeanne Wakatsuki Houston] describes vividly the life in the camp and the humiliations suffered by the detainees... A sober and moving personal account." —Publishers Weekly
— No Source

Jeanne Wakatsuki Houston was born in Inglewood, California, in 1934. She studied sociology and journalism at San Jose State University, where she met her husband and cowriter of her memoir Farewell to Manzanar, James D. Houston. For their teleplay for the NBC television drama based on Farewell to Manzanar, they received the prestigious Humanitas Prize. Jeanne’s widely anthologized essays and short stories were first collected in Beyond Manzanar: Views of Asian American Womanhood. Her works have earned numerous honors, including a United States-Japan Cultural Exchange Fellowship; a Rockefeller Foundation residence at Bellagio, Italy; and a 1984 Wonder Woman Award, given to women over forty who have made outstanding achievements in pursuit of truth and positive social change.

James D. Houston (1933–2009) was the author of several novels and nonfiction works exploring the history and cultures of the western United States and the Asia/Pacific region. His works include Snow Mountain Passage, Continental Drift, In the Ring of Fire: A Pacific Basin Journey, and The Last Paradise, which received a 1999 American Book Award for fiction. A former Wallace Stegner Fellow at Stanford, Jim received a National Endowment for the Arts writing grant, a Library of Congress Story Award, and traveled to Asia lecturing for the U.S.I.S. Arts America program.