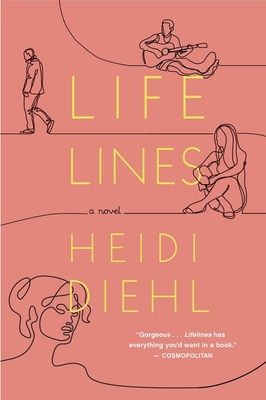 For fans of Meg Wolitzer and Maggie Shipstead: a sweeping debut novel following an American artist who returns to Germany—where she fell in love and had a child decades earlier—to confront her past at her former mother-in-law’s funeral

It’s 1971 when Louise leaves Oregon for Düsseldorf, a city grappling with its nation’s horrific recent history, to study art. Soon she’s embroiled in a scene dramatically different from the one at home, thanks in large part to Dieter, a mercurial musician. Their romance ignites quickly, but life gets in the way: an unplanned pregnancy, hasty marriage, the tense balance of their creative ambitions, and—finally, fatally—a family secret that shatters Dieter, and drives Louise home.

But in 2008 she’s headed to Dieter’s mother’s funeral. She never returned to Germany, and has since remarried, had another daughter, and built a life in Oregon. As she flies into the heart of her past, she reckons with the choices she made, and the ones she didn’t, just as her family—current and former—must consider how Louise’s life has shaped their own, for better and for worse.

Exquisitely balanced, expansive yet wonderfully intimate, Lifelines explores the indelible ties of family; the shape art, history, and nationality give  to our lives; and the ways in which we are forever evolving, with each step we take, with each turn of the Earth.

HEIDI DIEHL’s writing has appeared in Colorado Review,Crazyhorse,Indiana Review,Mississippi Review,Witness, and elsewhere. She received her MFA from Brooklyn College and has won fellowships from the MacDowell Colony, the Saltonstall Foundation, and the Vermont Studio Center. She lives in Brooklyn.

"Gorgeous...Lifelines has everything you'd want in a book: family secrets, love triangles, and beautiful writing."
—Cosmopolitan

"What a graceful, attentive, and beautiful debut. Among Diehl’s abundant gifts are a wonderful eye for the telling detail, a lovely narrative patience, a playful comfort with structural panache, a genuine affection for her characters, and a keen understanding of the ways in which families actually work. The novel thrums with the sadness of life, and also with its comforts."
—George Saunders

"A fascinating interrogation of complicated histories—both cultural and personal—as well as an exploration of the roles that art, family, and creativity play in our lives.”
—Nylon

"Deeply woven...The family drama is interlaced with beautiful, meticulously detailed scenes describing Germany, from the underground music scene to the architecture and urban planning that shapes daily life. Streetscapes, stone facades, unofficial trodden pathways across grassy parks, outdoor markets selling dense rye bread—the scene is built on each page with precise detail. Diehl also writes knowledgeably about the arts, from sculpture and performance art to painting and avant-garde music. The book pulses with an almost obsessive level of musical detail, cataloguing genres like psychedelic drone and experimental dub, cult bands like Kraftwerk and the Grateful Dead, and the liberated cultural scene that thrived in the 1970s...Lifelines weaves a rich tapestry out of interconnected personal histories and shows that we are all greater than the sum of our parts."
—The Oregonian

“Lifelines is a true tapestry of a book, intricate and elegantly told, about family and nationhood, and the ways that each generation is shaped by the one that came before it. Diehl writes with a remarkable emotional intelligence that will stay with me for a very long time.”
—Julia Pierpont, New York Times-bestselling author of Among the Ten Thousand Things and The Little Book of Feminist Saints

“From the collision of art and family to the prolonged misunderstandings between characters living across cultures, Heidi Diehl has crafted a complex novel that builds with subversive power, to an assured ending. With riveting precision, Lifelines addresses an inevitable reality of adulthood: for better or worse, we remain beholden to all our relationships, even those we choose to end.”
—Idra Novey, author of Ways to Disappear and Those Who Knew

"Lifelines is an arresting portrait of selves left behind and selves discovered. Heidi Diehl writes with precision and heart about home, history, identity and the lives we might have led."
—Ramona Ausubel, author of Sons and Daughters of Ease and Plenty and Awayland

"At once moving and intelligent, Heidi Diehl’s Lifelines is about history and politics, memory and art. It spans continents and generations, and it earns its ambition. It’s a riveting, important debut."
—Joshua Henkin, author of Matrimony and The World Without You

"Diehl's debut confidently handles these cultural and historical complexities and is equally fluent in depicting the concerns and processes of visual artists and musicians. A serious, nuanced portrait of a family of creative people as their decisions, large and small, play out in their lives."
—Kirkus

"Diehl finds the bittersweet heartache of retrospection, and compassionately explores how art helps heal. This complex, intimate story memorably portrays what it looks like to reckon with one’s choices and to feel both uncertainty and peace."
—Publishers Weekly

"A strong debut novel from a writer with a talent for character building."
—Booklist

1. How does Louise grow emotionally and also revise her own narrative of her relationship to her parents? Consider Dieter’s relationship with his mother and to his father’s story by comparison. Have you revised your own self-narrative or reinterpreted your family story as you’ve aged?

3. Should Hannelore have told Louise the Hinterkopf family secret? Do you think Louise does the right thing in telling Dieter? Was there a right thing to do? Does the secret belong to Dieter and should he tell Elke? Is the secret Richard, Dieter, and Louise keep from their daughters about what happened in Eugene at all comparable to the secret in Dieter’s family? How does it affect Margot and Elke?

4. How does the novel’s structure—wherein we move from one character’s perspective to another and also between time periods—contribute to its meaning? Imagine a given experience from another character’s perspective: What might Dieter’s 1978 visit to Eugene look like from his perspective, for instance? If you were to gain more sympathy for Dieter, would you lose some for Louise? Josef Albers’s dictums—that colors are in continuous flux and are always fooling us—express a subjectivity Louise finds reassuring (p. 42). How much of the truth of what happens is subjective? Does subjectivity become a more loaded proposition in reference to something like the horrors of Nazi Germany?

5. What desire lines does Louise trace in her life? Where do other characters stray from prescribed paths and follow their own? Walking in a Berlin park, Louise watches the path ahead disappear from sight and hears Richard’s voice in her head asserting: Pedestrians need mystery. They need turns (p. 284). Is it always better not to know what paths our lives will take? When have you followed your own desire lines?

6. When they meet again in 2008, Ute recasts Louise’s naked dancing not as a desperate act but as a feminist gesture. How do you read it? Can both interpretations be true? How much easier is it today to juggle a career with motherhood? Do you read Margot’s role in the band as empowering or diminishing? Is that a subjective question? Have you questioned whether an action you’ve taken in your own life is feminist or anti-feminist?

7. Does Dieter over-identify with Germany’s crimes? Does his feeling of shame do harm to his sense of identity and his relationships? When does Louise experience her Americanness? The terrorism at the 1972 Munich Olympics crushes Germany’s spirits. Have you experienced a communal sense of hope or disappointment in your own nation? Is your sense of identity affected by your relationship to your country?

8. Richard is glad the communist façades at Alexanderplatz in Berlin haven’t been torn down: “Better those ugly relics,” he thinks, “than some chain hotel” (p. 299). Do you agree with him? In Düsseldorf, Dieter shows Louise the marks of ammunition in the buildings. Compare the preserved artifacts of a city’s past with deliberately constructed monuments to past people or events. What purpose does each serve? Do all monuments become artifacts? Richard says that the architects of the Holocaust Memorial in Berlin intended for life to happen in and around it. Is there some discomfort for visitors built into that encounter? Think of your favorite monument and consider the question Richard asks of all monuments: who is it for?

9. How does Louise’s art practice evolve between 1971 and 2008? What happens when Richard refrains from documenting Louise’s 18th project? Does Louise’s response signify growth on her part? Louise sees the project as “a forced reckoning with time,” a way of marking and assessing a thing, like an anniversary, which involves both grief and joy (p. 316). Do you use anniversaries as a way of checking in with your life’s progress, or do you have another way of doing this? Is it important to both grieve and celebrate the passage of time?

10. Dieter wants to do things differently from the previous generation. Does he succeed? Does he confront the past or try to escape it? Dieter thinks Joel’s knowledge of musical influences comes too easily and that internet searches make “the past a constant buffet” (p. 269). Do you think the internet cheapens our relationship to the past?

11. Louise seeks to document time’s passage in her art projects while Dieter pursues a kind of timelessness, both in his music and by moving to New York, a city he describes as “ongoing” and without time. How do you experience these two attitudes toward time in your own life: as something to be measured and captured on the one hand, escaped or transcended on the other? Are both orientations necessary for living fully? Louise wonders how much of her life is a question of timing and asks herself, What if Dieter had come before she’d met Richard, or if she hadn’t met Richard? Is it helpful or dangerous to consider life’s what-ifs?

12. Why doesn’t Louise return to Germany after going to Eugene? What drew her to Dieter in Germany and what divided them? Do you think Richard is a better partner for Louise? Elke and Dieter, perhaps most affected by her decision, are both doing well—if either were struggling, would you judge Louise’s decision differently?

13. How do Louise and Dieter both attempt to apologize to the other? Do they forgive each other, or themselves? Does Richard forgive Louise? Is an apology needed to forgive? How does the passage of time help bring about forgiveness? Does a country need to apologize for its crimes and be forgiven—or forgive itself—in order to move on?

14. Which aspects of Louise’s character do you see in Margot? In Elke? What are the strengths and vulnerabilities of each? Is Louise a different mother to each? Why is Elke drawn to astrology? What makes Margot swerve away from graduate study toward music? Elke worries about Dieter’s feelings, is protective of Margot, and takes pains to reassure Richard. Does any other character express as much concern for the well-being of others? Does Elke’s upbringing explain her sensitivity?

15. Louise apologizes to Elke for having her baptized and promises she’ll let Elke make her own choices when she’s older. Is choice sometimes overvalued or burdensome? If achieving maturity can be seen as a matter of reconciling ourselves both to the circumstances we’ve chosen and to those we’ve been handed, do you think Dieter and Louise accomplish this reconciliation? Which is more difficult: to accept the choices you’ve made or those that have been made for you?

Nora Krug, Belonging: A German Reckons with History and Home

Lucy Lippard, From the Center: Feminist Essays on Women’s Art

Kevin Lynch, The Image of the City