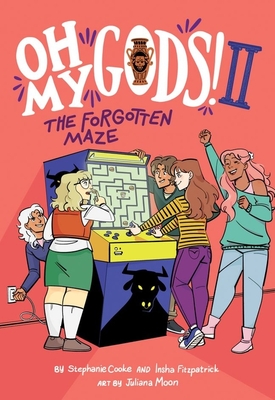 In this epic sequel to middle-grade graphic novel Oh My Gods!, Karen and her new friends descend into a forgotten maze beneath Mt. Olympus Junior High in search of an online troll by the name of M1N0T4UR. For fans of Raina Telgemeier and Kayla Miller.

When Karen moved to Mt. Olympus, she certainly didn’t expect to start junior high with a bunch of gods and goddesses—let alone discover she’s a demigoddess (who doesn’t yet know her powers)!

Having recently joined the school newspaper, Karen decides to investigate a mysterious online troll that goes by the moniker M1N0T4UR. This leads her to a treacherous maze beneath the school where Karen and her friends must complete a set of phases to leave the labyrinth.

The stakes are higher than ever and a wrong move could lead to some terri-BULL consequences in this a-maze-ingly action-packed, fast-paced, pun-filled companion to Oh My Gods!.

Juliana Moon is a Brazilian digital artist working in comics and illustration. She is drawn to fantasy, adventures, and mystery. Her favorite things to draw are dogs and people with different backgrounds. Very inspired by anime and every animation movies/shows ever, Juliana’s art is a mixture of everything she likes. She lives in Rio de Janeiro, Brazil.