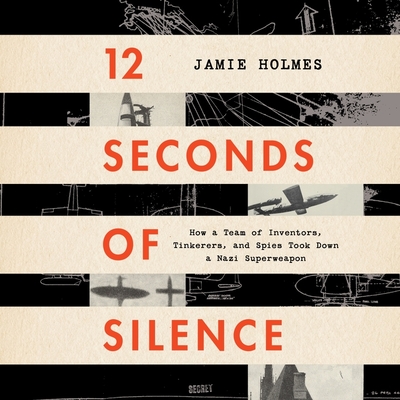 JAMIE HOLMES is a writer living in Washington, DC. His work has appeared in print or online in the New York Times, The New Yorker, Slate, the Christian Science Monitor, the New Republic, the Atlantic, Foreign Policy, USA Today, and the Daily Beast. His first book was Nonsense: The Power of Not Knowing.

Praise For 12 Seconds of Silence: How a Team of Inventors, Tinkerers, and Spies Took Down a Nazi Superweapon…

“A fascinating account of the evolving specter of war, replete with biographies of important figures who may not have been world leaders, but whose work altered it forever. ”—Booklist

“Perhaps the greatest praise I can offer as an author is to admit to wishing that I had written this book myself. Jamie Holmes takes an arcane chapter of World War II science and reveals it to be a story full of drama and intrigue, an engrossing narrative that keeps you turning pages . . . Holmes’s storytelling is exquisite. Absolutely superb.” — Gregory A. Freeman, bestselling author of The Forgotten 500 and Sailors to the End

“Holmes writes like a dream . . . it all unfolds with the pace of a thriller.” — Peter Bergen, New York Times bestselling author of Manhunt and Trump and His Generals

"In his eye-opening marvel of a book, Jamie Holmes reveals the fascinating story of the humble proximity fuse. It turns out to be not so humble, but rather a mighty war-winner and soldier-saver—and all thanks to an eccentric and eclectic band of tinkerers, hobbyists, and geeks who overcame enormous obstacles to turn what was once science fiction into a reality.”—Alexander Rose, New York Times bestselling author of Washington’s Spies and Empires of the Sky