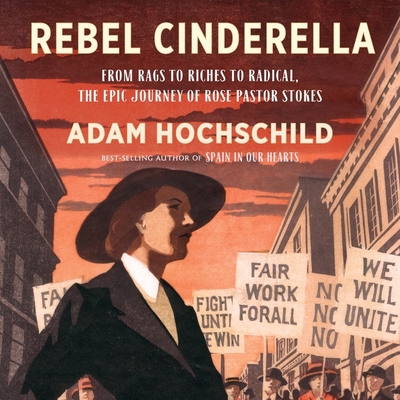 From the best-selling author of King Leopold's Ghost and Spain in Our Hearts comes the astonishing but forgotten story of an immigrant sweatshop worker who married an heir to a great American fortune and became one of the most charismatic radical leaders of her time.

Rose Pastor arrived in New York City in 1903, a Jewish refugee from Russia who had worked in cigar factories since the age of eleven. Two years later, she captured headlines across the globe when she married James Graham Phelps Stokes, scion of one of the legendary 400 families of New York high society. Together, this unusual couple joined the burgeoning Socialist Party and, over the next dozen years, moved among the liveliest group of activists and dreamers this country has ever seen. Their friends and houseguests included Emma Goldman, Big Bill Haywood, Eugene V. Debs, John Reed, Margaret Sanger, Jack London, and W.E.B. Du Bois. Rose stirred audiences to tears and led strikes of restaurant waiters and garment workers. She campaigned alongside the country’s earliest feminists to publicly defy laws against distributing information about birth control, earning her notoriety as “one of the dangerous influences of the country” from President Woodrow Wilson. But in a way no one foresaw, her too-short life would end in the same abject poverty with which it began.

By a master of narrative nonfiction, Rebel Cinderella unearths the rich, overlooked life of a social justice campaigner who was truly ahead of her time.

Praise For Rebel Cinderella: From Rags to Riches to Radical, the Epic Journey of Rose Pastor Stokes…

“Although the stuff of fairy tale—penniless immigrant factory worker marries old-money millionaire, then uses her fortune and influence to fight for the laboring classes—the story Adam Hochschild tells in Rebel Cinderella is as taut and true as a well-tuned violin.  Rose Pastor Stokes comes alive as a woman of passionate conviction and rare imaginative power, restored by Hochschild to her rightful place in the history of America’s rise to world prominence in the first decades of the twentieth century.”
––Megan Marshall, author of Elizabeth Bishop

“Through the lens of a remarkable marriage, Adam Hochschild draws a vivid portrait of the Gilded Age – of immigrants, sweatshops, tenements, strikes, enclaves of patrician privilege, and a ‘citadel of socialism’ on a private island.  At the center of it all is Rose, whose extraordinary story ends as anything but a fairy tale.”
––Jean Strouse, author of Morgan: American Financier

“Adam Hochschild recounts the incredible story of Rose Pastor Stokes, a Jewish immigrant from Eastern Europe who toiled in a cigar factory, met and married a rich socialite, and became an infamous socialist firebrand. The book is chock-full of fascinating characters and stories, with Stokes and her comrades often recounting their dramatic lives in their own words."
––Tyler Anbinder, author of City of Dreams

“Lucidly written and painstakingly researched, this is a joy to read, cementing Pastor in her rightful place with other progressive figures of the time.”
––Library Journal, starred review

“Hochschild’s captivating and fast-paced biography is a true delight and an excellent addition to women’s history shelves.”
—Booklist

“Adam Hochschild writes movingly about an unlikely pair who also served as a potent symbol . . . Hochschild is a superb writer who makes light work of heavy subjects . . . Where information is scant or nonexistent, he deploys elegant workarounds that evoke a vivid sense of time and place . . . Hochschild’s book shows us what a radical movement looked like from the inside, with all of its high-flown idealism and personal intrigues. Whatever protections we take for granted once seemed unfathomable before they became real.”
––New York Times

"This vibrant biography portrays the riveting charisma of the socialist activist Rose Pastor Stokes . . . Hochschild captures the improbability and idealism of both Pastor Stokes and her era, a time when it seemed that stark divisions of class, race, and gender might be erased, in an instant, by love."
––The New Yorker

“Adam Hochschild is among the most readable of historians . . . Hochschild has done a brilliant job of bringing [the Stokes’ marriage] to life and in doing so, illuminating the complex social and economic history of a generation whose rabble-rousers and dreamers bequeathed us such reforms as Social Security, Medicare, child labor laws and the eight-hour day.”
––Associated Press

"Hochschild's historical account is both gripping and occasionally heartbreaking."
––Shelf Awareness for Readers

"A compelling read about a fascinating time in American history, one that bears some resemblance to today."
––Minneapolis Star-Tribune