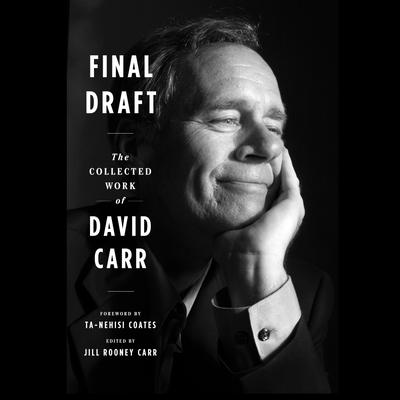 Throughout his 25-year journalistic career, David Carr was noted for his sharp and fearless observations, his uncanny sense of fairness and justice, and his remarkable compassion and wit. His writing was informed both by his own hardships as an addict, and his intense love of the journalist’s craft. His range—from media politics to national politics, from rock ‘n’ roll celebrities to the unknown civil servants who make our daily lives function—was broad and often timeless. Whether he was breaking exclusives about Amazon or mourning Philip Seymour Hoffman’s death or taking aim at editors who valued political trivia over substance, Carr’s voice and concerns remain enormously influential and relevant. In these hundred or so articles, from a range of publications, we read his stories with fresh eyes. Edited by his widow, Jill Rooney Carr, and with an introduction written by one of the many journalists David Carr mentored and promoted, Ta-Nehisi Coates, Final Draft is a singular event in the world of writing news, an art increasingly endangered in these troubled times.

CHRISTOPHER RYAN GRANT  is an actor and voice artist based in New York City. As well as narrating numerous audiobooks, and lending his voice to video games, animated shows, and radio/TV campaigns, he has also appeared on Broadway in The Iceman Cometh starring Denzel Washington and the Tony Award winning Million Dollar Quartet. He has been seen on stage recently in Coriolanus at Shakespeare in the Park, at The Public, Lincoln Center, New World Stages, Yale Rep, Shakespeare Theatre (D.C.), The MUNY, and at NY Stage & Film among many others. Film/TV credits  include Rolling on the Floor Laughing, Hard Times For Softcore, How You Are To Me, “The Other Two”, and “Nella the Princess Knight”. He holds an MFA from the Yale School of Drama.