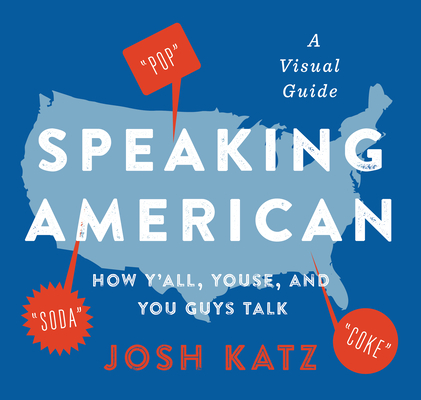 How Y'all, Youse, and You Guys Talk: A Visual Guide

From the creator of the New York Times dialect quiz that ignited conversations about how and why we say the words we say, a stunning and delightful exploration of American language.

Did you know that your answers to just a handful of questions can reveal where you grew up? When Josh Katz released his interactive dialect quiz in the New York Times in 2013, it became the most viewed page in the paper's history. Now a graphics editor, Katz harnessed the overwhelming response to that quiz to create Speaking American, an extraordinary and beautiful tour through the American vernacular.

How do you pronounce "pecan"? What do you call a long sandwich with varieties of meats and cheeses? Do you cut the grass or mow the lawn?

The answers to these questions??—??and the distinctions they reveal about who says what and where they say it??—??are not just the ultimate in cocktail party fodder; they are also windows into the history of our nation, our regions, and our language. On page after page, readers will be fascinated and charmed by these stunning maps of how Americans speak as they gain new insights into our language and ourselves.

For fans of Eats, Shoots and Leaves and How the States Got Their Shapes, Speaking American is an irresistible feast of American regional speech.

JOSH KATZ was born and raised in South Jersey, where he ate hoagies, wore sneakers, and celebrated Mischief Night. After graduating from the North Carolina State University Department of Statistics, he began work as a graphics editor with the New York Times,where his work has focused on finding patterns in data and turning them into stories. He lives in New York.
Loading...
or support indie stores by buying on