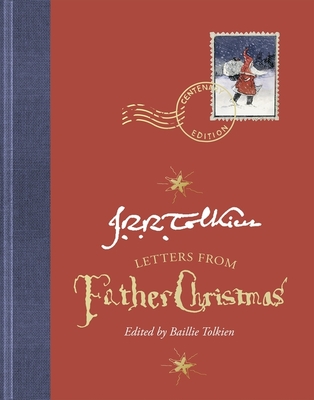 For fans of Tolkien and lovers of Christmas holidays, Letters from Father Christmas is a gorgeous, festive gift featuring a wealth of letters that Tolkien created for his children, appearing in this format for the first time. Published on the 100th anniversary of the first letter Tolkien sent to his firstborn, John, in 1920, this handsome edition will also include an introduction from daughter-in-law Baillie Tolkien, reflecting on the centenary anniversary of the letters, as well as a personal note by Tolkien himself reproduced for the first time.

Every December, an envelope bearing a stamp from the North Pole would arrive for J.R.R. Tolkien’s children. Inside would be a letter in strange spidery handwriting and a beautiful colored drawing or some sketches. The letters were from Father Christmas.

They told wonderful tales of life at the North Pole: how all the reindeer got loose and scattered presents all over the place; how the accident-prone Polar Bear climbed the North Pole and fell through the roof of Father Christmas’s house into the dining room; how he broke the Moon into four pieces and made the Man in it fall into the back garden; how there were wars with the troublesome horde of goblins who lived in the caves beneath the house!

Sometimes the Polar Bear would scrawl a note, and sometimes Ilbereth the Elf would write in his elegant flowing script, adding yet more life and humor to the stories. No reader, young or old, can fail to be charmed by the inventiveness and “authenticity” of Tolkien’s Letters from Father Christmas.

“Will appeal to any kids whose appreciation of new worlds hasn't been blighted by Action Man and enlightened schoolteachers.”—Terry Pratchett, Bath and West Evening Chronicle

“Tolkien at his relaxed and ingenious best.”—The Times