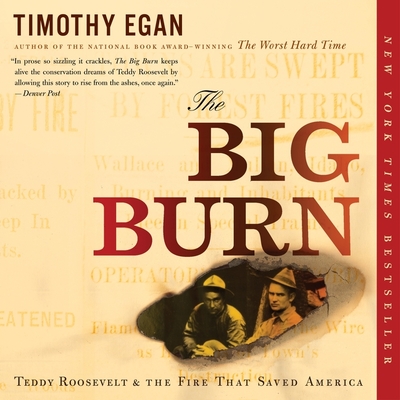 "Egan brings a touching humanity to this story of valor and cowardice in the face of a national catastrophe, paying respectful attention to Roosevelt's great dream of conservation and of an America 'for the little man.'" -Publishers Weekly, starred review "Essential for any Green bookshelf." -Kirkus Reviews, starred review "Historians will enjoy Egan’s well-written book, featuring sparkling and dynamic descriptions of the land and people, as a review of Roosevelt’s conservation ideas, while general readers will find his suspenseful account of the fires mesmerizing." -- Library Journal "Egan tells the story with great humanity . . . In prose so sizzling it crackles, The Big Burn keeps alive the conservation dreams of Teddy Roosevelt by allowing this story to rise from the ashes, once again." -- Denver Post "[Egan] has already proved himself to be a masterly collector of memorable stories. His new book, The Big Burn, continues in the same tradition . . . What makes The Big Burn particularly impressive is Egan’s skill as an equal-opportunity storyteller. By this I mean that he recounts the stories of men and women completely unknown to most of us with the same fervor he uses to report the stories of historic figures . . . Even as we mark the centennial of this great fire, wildfires in the West continue to burn. It makes this book – which is a masterwork in every sense – worthy of a very careful reading." -- Christian Science Monitor "[Egan] is at the top of his game . . . An important cautionary tale for these days that also reads like a classic adventure story." -- Washington Times "Egan is a gorgeous writer. His chapters on the 'blowup'... should become a classic account of an American Pompeii." -- BookPage "Muir called Pinchot 'someone who could relish, not run from a rainstorm' -- a phrase that also describes The Big Burn's narrator. For as long as Egan keeps chasing storms, whether of dust, fire, rain or snow, you'd be smart to call shotgun." -- Los Angeles Times "Few writers have the Pulitzer Prize-winning Egan's gift for transforming history lessons into the stuff of riveting page-turners... Don't miss this one. Grade: A." -- Entertainment Weekly
— No Source

TIMOTHY EGAN is a Pulitzer Prize–winning reporter and the author of eight other books, most recently The Immortal Irishman, a New York Times bestseller. His book on the Dust Bowl, The Worst Hard Time, won a National Book Award for nonfiction. His account of photographer Edward Curtis, Short Nights of the Shadow Catcher, won the Carnegie Medal for nonfiction. He writes a biweekly opinion column for the New York Times.
Loading...
or
Not Currently Available for Direct Purchase