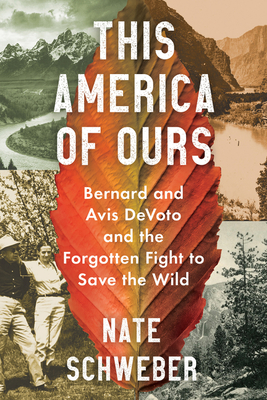 This America Of Ours

“A brilliant rendering of what 'the open space of democracy' must be if we are to survive its present state of erosion.” –Terry Tempest Williams

In late-1940s America, few writers commanded attention like Bernard DeVoto. Alongside his brilliant wife and editor, Avis, DeVoto was a firebrand of American liberty, free speech, and perhaps our greatest national treasure: public lands. But when a corrupt band of lawmakers, led by Senator Pat McCarran, sought to quietly cede millions of acres of national parks and other western lands to logging, mining, and private industry, the DeVotos entered the fight of their lives. Bernard and Avis built a broad grassroots coalition to sound the alarm—from Julia and Paul Child to Ansel Adams, Arthur Schlesinger Jr., Alfred Knopf, Adlai Stevenson, and Wallace Stegner—while the very pillars of American democracy, embodied in free and public access to Western lands, hung in the balance. Their dramatic crusade would earn them censorship and blacklisting by Joe McCarthy, J. Edgar Hoover, and Roy Cohn, and it even cost Bernard his life.

In This America of Ours, award-winning journalist Nate Schweber uncovers the forgotten story of a progressive alliance that altered the course of twentieth-century history and saved American wilderness—and our country’s most fundamental ideals—from ruin.


Praise For This America Of Ours: Bernard and Avis DeVoto and the Forgotten Fight to Save the Wild…

"An energetic celebration of a man who, largely forgotten today, did more than most to save the national parks in the West." — Wall Street Journal

"It’s eerie, the way the best reporters, working long years on deep research, end up publishing the exact right book for the moment when it’s most needed. This uplifting, heart-rending biography of two of America’s greatest conservationists and their fortitude in the face of governmental corruption and attacks on our public lands is inspiring. Nate Schweber has written a splendid love story as well as a beautiful book for our burning, struggling times." — Rick Bass, author of For a Little While

"A stirring story of a husband and wife and their passionate devotion to the land—and great food. . . Drawing on abundant archival sources, Schweber argues persuasively that because of the DeVotos’ efforts, millions of acres of public lands were saved from destruction and preserved as national treasures. . . An exuberant celebration of an astounding couple." — Kirkus Reviews (starred review)

"Finally, someone has written the biography that Avis and Bernard DeVoto deserve. Nate Schweber delivers their tale with verve and nuance, effortlessly weaving together the fight over America's vast wilderness heritage with the politics of Cold War Washington, all within the life story of one of the country's most important literary couples."
— Clay Risen, author of The Crowded Hour

"Bernard DeVoto was America's great environmentalist before the term was coined. He was a populist, while remaining a great liberal. He gave Americans a lyrical history of the conquest of the west while admitting the moral ambiguity of it. He was an internationalist while never leaving the soil of the United States. This and more is why, in these fraught times for our nation, Nate Schweber's biography is so urgent and necessary."
— Robert D. Kaplan, author of An Empire Wilderness and Earning the Rockies

"This America of Ours is an intimate, compelling portrait of one of America’s most consequential literary partnerships. Bernard and Avis DeVoto were magnetic intellectuals who spent their lives defending public lands and constitutional freedoms; Nate Schweber narrates their battles against McCarthyism and Congressional land grabs in vivid and witty prose. Using previously unpublished sources, Schweber illuminates the lives of both Bernard and Avis, and reveals the intensity of their friendships with luminaries like Julia Child and Robert Frost. A must read for anyone interested in the dramatic politics of conservation at America’s midcentury—and anyone who enjoys a strong martini." — Megan Kate Nelson, author of Saving Yellowstone: Exploration and Preservation in Reconstruction America

"Charming and absorbing, This America of Ours is the biography of a marriage between two lavishly talented characters, the witty and profane Avis DeVoto, who would become Julia Child's best friend and editor, and western historian and conservationist Bernard DeVoto. Schweber weaves together their fight to save public lands in the West with a moving account of their literary partnership and enduring love. The result is an exuberant delight, full of the couple's righteous invective against crooked politicians and their devotion to haute cuisine: Don't miss the recipe for the DeVoto Dry Martini."  — Caroline Fraser, Pulitzer Prize-winning author of Prairie Fires: The American Dreams of Laura Ingalls Wilder

"This America of Ours chronicles the history of one of conservation’s greatest power couples in their life-long battle to save our wild public lands and oppose the destruction and privatization of open spaces. Schweber tells all in sturdy, vivid prose; the pulse of this book beats with a lust for life." — Doug Peacock, author of Grizzly Years and Was It Worth It?

"How could we have missed the swashbuckling story of Avis and Bernard DeVoto, tribunes of public lands, free speech and liberty itself? Thankfully we have it now from Nate Schweber, in telling and rich details that make clear its ties to Joe McCarthy, J. Edgar Hoover, and today's demagogue-ridden America." — Larry Tye, New York Times bestselling author of Demagogue

"Nate Schweber’s energetic and commanding account of DeVoto’s impassioned career in defense of national parks and public lands, and his defiance of two of the country’s most shameless bullies, Joseph McCarthy and Pat McCarran, the timeline of the despicable deeds that DeVoto risked his reputation and livelihood to thwart feels an awful lot like NOW. This America of Ours is alarming, gripping, and gratifying. Herein justice is done -- to the lives of DeVoto and his equally brave and brilliant wife, Avis, and to the better angels of our democracy." — John Taliaferro, author of Grinnell: America’s Environmental Pioneer and His Restless Drive to Save the West

“Nate Schweber’s masterful narrative fulfills the most important agenda for books—shedding new light on a subject we already know and love. I have been reading Bernard Devoto books and essays for my entire life and  only now do I understand his enormous contribution to land conservation. This is a vital book about the American experience.” — Rinker Buck, New York Times bestselling author of The Oregon Trail

"This America of Ours is so many fantastic things all at the same time:  the story of a complex marriage, the history of one of our most important historians, and a razor's-edge drama about a critical fight to preserve America's public lands -- the wild places that define our nation's soul.  And Schweber manages to tell all these stories in a thoroughly gripping narrative, a story whose pages I could not wait to turn."
— Michael Punke, #1 New York Times bestselling author of The Revenant, Ridgeline, and Last Stand

"Americans have long recognized their debt of gratitude to farsighted individuals who created our system of public lands. Thanks to Nate Schweber's meticulous research and compelling narrative in This America of Ours, we can now take measure of our equal debt to Bernard and Avis DeVoto and others who saved those remarkable lands from destruction. A must-read for anyone who cares about conservation in America." — Peter Stark author of Young Washington: How Wilderness and War Forged America's Founding Father

NATE SCHWEBER is an award-winning journalist for the New York Times and ProPublica, among many other publications. His recent work for the Times includes investigating sexual abuse within the scholastic athletic communities and a 2016 series about murders in the Bronx that was nominated for a Pulitzer Prize. The Outdoor Writers Association of America awarded him a conservation writing award in 2015. He has also won magazine writing awards from that organization in 2015 and 2018, respectively, for a story about a biologist for the magazine Trout, and a story about prairie conservation for the Anthony Bourdain publication Explore Parts Unknown. He has appeared on Today, CNN, and WNYC. He lives in Brooklyn.
Loading...
or support indie stores by buying on