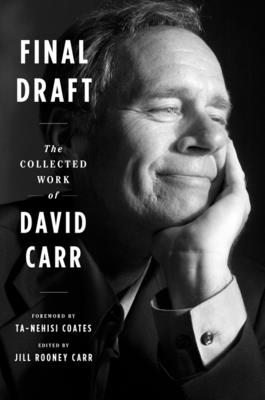 Throughout his 25-year career, David Carr was noted for his sharp and fearless observations, his uncanny sense of fairness and justice, and his remarkable compassion and wit. His writing was informed both by his own hardships as an addict and his intense love of the journalist’s craft. His range—from media politics to national politics, from rock ‘n’ roll celebrities to the unknown civil servants who make our daily lives function—was broad and often timeless. Edited by his widow, Jill Rooney Carr, and with an introduction by one of the many journalists David Carr mentored, Ta-Nehisi Coates, Final Draft is a singular event in the world of writing news, an art increasingly endangered in these troubled times.

Praise For Final Draft: The Collected Work of David Carr…

“Reading David Carr again is a reminder of how much we miss him. He is never predictable, a disease infecting most columnists. As this book attests, his interests ranged wide. Pick your subject: Bill Clinton? Press blowhards? Washington insiders? Fox News? Silicon Valley? Julian Assange? He is always provocative, though never gratuitous. He is funny, but not mean. His prose sings. And for those who knew him, his prose is only part of what made Carr special. Read this delicious book and you will glimpse the other part: what a good, generous man David Carr was.”—Ken Auletta, author of Frenemies   "A revelatory collection reminding us of what journalism used to be—and what it ought to be."—Kirkus, STARRED review   "Readers will appreciate having this wide-ranging sample of Carr’s inimitable perspective on American life."—Publishers Weekly, STARRED review   “I was so lucky 20 years ago to get a note from a Washington journalist I didn't know whose work I'd never read who was interested in working at my new online publication in New York that didn't yet exist. I read David Carr's clips and immediately fell in love, met him and fell in love some more, then instantly hired him to come along on that adventure. And for the rest of his life I was so proud every time he said -- classic Carrism --  I'd picked him up after he he'd fallen off a turnip truck.”—Kurt Andersen, Studio 360   “Wit, style, empathy, tough questions — it’s all here, in this collection by the one-man journalism school that was David Carr. Lovingly curated by his wife, Final Draft allows us to read decades of David’s best reportage about corruption, racism, celebrity, addiction, disease, and his love for his family, his skills only outdone by his humanity. God, I miss him.”—Jake Tapper, CNN

DAVID CARR was one of the most prolific and celebrated journalists of our time. Carr edited and wrote for a wide variety of publications, including the Twin City Reader in Minneapolis, the Washington City Paper, Inside.com, New York Magazine, the Atlantic, and the New York Times, where he created The Carpetbagger and the Media Equation columns. His memoir, The Night of the Gun, in which he chronicled his battles with substance addictions and his ultimate recovery, was a national bestseller. In 2015, Carr died at the age of 58.