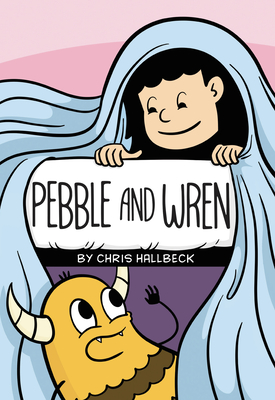 A little girl and her live-in monster learn about what makes them different—and what unites them. This graphic novel is a silly, sweet, and sometimes gross tribute to friendship, and to the wacky world we live in.

Based on his webcomic of the same name, Pebble and Wren follows human girl Wren and her live-in monster, Pebble, as she teaches them all about how the human world works—from why the moon changes shape to why we don't eat candy wrappers—while trying to unlock special abilities without which Pebble will have to return to the monster forest.

A silly, sweet, and sometimes gross tribute to friendship for fans of Calvin & Hobbes and Catwad.


Praise For Pebble and Wren…

“Chris is one of the funnies comic writers out there . . . when you combine his seemingly endless jokes with the sweetness of Pebble and Wren, the result is a complete delight." — — James Stewart, creator of Dinos and Comics

“Chris Hallbeck brings an indelible charm to everything he does and Pebble & Wren is no exception. It's surprisingly wholesome for a story about a horned, shape-shifting monster living under a kid's bed. Chris even manages to sneak in little learning moments without taking anything away from the fun (I learned why we feel dizzy after spinning around!).” — — J. L. Westover, creator of Mr. Lovenstein

Chris Hallbeck is a roughly human shaped collection of anxieties held together by caffeine and curiosity. He’s been publishing comics on the internet since 2006 with his single panel comic The Book of Biff, followed by his multi-panel strip Maximumble. He was the co-writer and artist for Unshelved at the end of it’s run which led to co-creating the similarly themed Library Comic. With the addition of his voice and animation, his comics have found an audience of over two million followers across TikTok, YouTube, and Instagram. He lives in Michigan with his wife, two children, and a small worm in the back of his skull that whispers comic ideas to him.