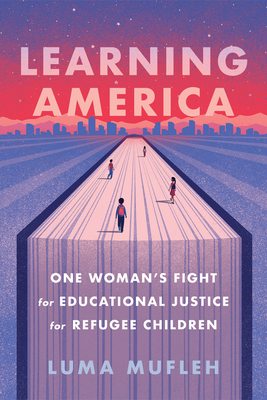 One Woman's Fight for Educational Justice for Refugee Children

It was a wrong turn that changed everything. When Luma Mufleh—a Muslim, gay, refugee woman from hyper-conservative Jordan—stumbled upon a pick-up game of soccer in Clarkston, Georgia, something compelled her to join.  The players, 11- and 12-year-olds from Liberia, Afghanistan, and Sudan, soon welcomed her as coach of their ragtag but fiercely competitive group. Drawn into their lives, Mufleh learned that few of her players, all local public school students, could read a single word. She asks, “Where was the America that took me in? That protected me? How can I get these kids to that America?”

Learning America traces the story of how Mufleh grew a group of kids into a soccer team and then into a nationally acclaimed network of schools for refugee children. The journey is inspiring and hard-won: Fugees schools accept only those most in need; no student passes a grade without earning it; the failure of any student is the responsibility of all. Soccer as a part of every school day is a powerful catalyst to heal trauma, create belonging, and accelerate learning. Finally, this gifted storyteller delivers provocative, indelible portraits of student after student making leaps in learning that aren’t supposed to be possible for children born into trauma--stories that shine powerful light on the path to educational justice for all of America’s most left-behind.


Praise For Learning America: One Woman's Fight for Educational Justice for Refugee Children…

“Mufleh…chronicles in this magnificent debut how a pickup soccer game transformed her life….Most inspiring, though, is the powerful conviction with which Mufleh writes about supporting those, who, like her, are still fighting for their American dream….Readers will be stunned.” — Publishers Weekly (starred review)

“An absorbing account of [Mufleh’s] journey from a Jordanian immigrant to an influential educational leader and activist…An impassioned, penetrating critique and inspiring model for progress.” — Kirkus Reviews (starred review)

"Luma Mufleh is truly remarkable, inspiring not only to her team of ‘Fugees’ but to anyone in the world who reads this book. It’s a powerful story, reminding us that the journey of refugees and immigrants doesn’t end the day they arrive in America. Coach Luma shows us the deep power of one of the world’s most universal languages, soccer, and above all the unifying strength of community." — José Andrés, chef, humanitarian, founder of World Central Kitchens

“This is much more than a book about an inspiring soccer team. It’s the story of what schools and sports can do to help heal trauma, foster community, and create opportunities for young people to succeed. To Luma Mufleh’s credit, it’s also a story about what schools can’t do—and shouldn’t be expected to do—to overcome society’s ills.” — Paul Tough, author of Whatever It Takes and How Children Succeed

“A truly extraordinary story of selflessness, compassion, and the pursuit of justice for one of the most vulnerable communities in our society: refugee children. Luma Mufleh gorgeously weaves her story as a gay, Jordanian immigrant living in America and her lifelong passion of coaching soccer to better the lives of refugee kids across the country.”
— Jose Antonio Vargas, founder of Define American and bestselling author of Dear America: Notes of an Undocumented Citizen

“Luma Mufleh brings her full self to her work, and now, in these pages, to telling the remarkable story of Fugees Family. Our shared American story comes to life in this compelling book.” — Laurene Powell Jobs, founder and president, Emerson Collective

“Luma Mufleh set out to build a soccer team for traumatized young refugees, only to discover the unconscionable neglect they were suffering at the hands of American public education. Then, with inexhaustible humanity, she created a school to make them whole, as learners and as people. Her heartbreaking and ultimately inspiring story illuminates how to remedy educational injustice not only for refugees but also for millions of children born into poverty and trauma in our own country.” — Dale Russakoff, author of the New York Times bestseller The Prize: Who’s in Charge of America’s Schools?

LUMA MUFLEH is the founder of Fugees Family, with schools now in Georgia and Ohio and an expanding footprint bringing educational equity to refugee resettlement communities across America.  Her TED Talk on educational justice for refugee families was viewed more than 1.7 million times.
Loading...
or support indie stores by buying on