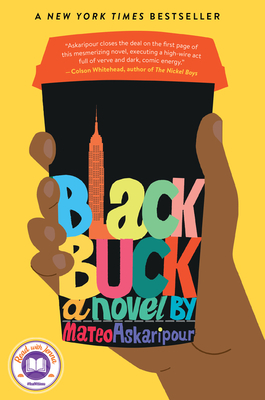 “Perhaps I have a different perspective on this book because I have a younger brother who is a Black, 20-something man in sales, but this book presents an evocative, honest, complex portrait of being a BIPOC person in a white-dominant workplace (albeit one that is high-powered, sales-driven, and New York City-based). This is a book that allows a reader to be seen if this is their experience, but also for a reader to learn about a different reality if this is not their own. Black Buck is a tightly woven, contemporary debut from an author to watch.”
— BrocheAroe Fabian, River Dog Book Co., Beaver Dam, WI
View the List

“Askaripour closes the deal on the first page of this mesmerizing novel, executing a high-wire act full of verve and dark, comic energy.”
—Colson Whitehead, author of The Nickel Boys

“A hilarious, gleaming satire as radiant as its author. Askaripour has announced himself as a major talent of the school of Ralph Ellison, Paul Beatty, Fran Ross, and Ishmael Reed. Full of quick pacing, frenetic energy, absurd—yet spot on—twists and turns, and some of the funniest similes I’ve ever read, this novel is both balm and bomb.”
—Nafissa Thompson-Spires, author of Heads of the Colored People

For fans of Sorry to Bother You and The Wolf of Wall Street—a crackling, satirical debut novel about a young man given a shot at stardom as the lone Black salesman at a mysterious, cult-like, and wildly successful startup where nothing is as it seems


There’s nothing like a Black salesman on a mission.

After enduring a “hell week” of training, Darren, the only Black person in the company, reimagines himself as “Buck,” a ruthless salesman unrecognizable to his friends and family. But when things turn tragic at home and Buck feels he’s hit rock bottom, he begins to hatch a plan to help young people of color infiltrate America’s sales force, setting off a chain of events that forever changes the game.


“Askaripour closes the deal on the first page of this mesmerizing novel, executing a high-wire act full of verve and dark, comic energy.”
—Colson Whitehead, author of The Nickel Boys

“A hilarious, gleaming satire as radiant as its author. Askaripour has announced himself as a major talent of the school of Ralph Ellison, Paul Beatty, Fran Ross, and Ishmael Reed. Full of quick pacing, frenetic energy, absurd—yet spot on—twists and turns, and some of the funniest similes I’ve ever read, this novel is both balm and bomb.”
—Nafissa Thompson-Spires, author of Heads of the Colored People

“I fell in love with this book and Buck from the first page. Mateo has not only authentically captured the feeling of being seen as ‘other,’ but he’s also managed to delicately show the way in which so many people protect themselves by creating an alter ego out of self-preservation. Buck’s journey is filled with heartache, laughter, fear, success, and karma.”
—Jay Ellis, actor, director, producer

“Black Buck  is a madcap look at compromises Black people make while trying to get ahead. When are you code-switching, and when is the code switching you? Mateo Askaripour didn’t write a novel, he crafted a business book forged in the abyss as it stares back. It’s a world that looks an awful lot like the hell we’re in.”
—Rion Amilcar Scott, author of The World Doesn’t Require You


“When Darren, our protagonist, is offered the opportunity of a lifetime, this unforgettable story sets off at light speed. Combining such humor, intelligence, heartbreak, and narrative skill in one book takes immense talent. Mateo Askaripour has accomplished this task with room to spare. Black Buck is an important treatise on Black ambition; Mateo Askaripour is an important writer, a voice we need. We should all look forward to what he produces next.”

“Black Buck is funny, sharp, and carried by a voice that is entirely its own. This debut is ambitious and Askaripour’s daring pays off beautifully.”
—Nana Kwame Adjei-Brenyah, author of Friday Black

“A first novel that satirically lays out the wretched excesses of turn-of-the-twenty-first-century capitalism as it both enriches and disfigures a bright young Black man’s coming-of-age . . . jazzily discursive and rhythmically propulsive . . . with punchy, go-for-broke mother-wit.”
—Kirkus Reviews

“Mateo Askaripour’s Black Buck is set to send up the world of corporate America in this sharp debut about a young Black man who reinvents himself as a skilled salesman on a mission.”
—PopSugar, “42 Books Everyone Will Be Talking About in 2021”

MATEO ASKARIPOUR’s work aims to empower people of color to seize opportunities for advancement, no matter the obstacle. He was chosen as one of Entertainment Weekly’s “10 rising stars to make waves in 2021,” a 2018 Rhode Island Writers Colony writer-in-residence, and his writing has appeared in The New York Times, Entrepreneur, Lit Hub, and elsewhere. His debut novel BLACK BUCK was an instant New York Times bestseller and a Read With Jenna Today Show book club pick. He lives in Brooklyn. Follow him on Instagram and Twitter at @AskMateo.