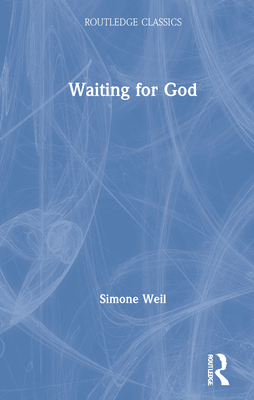 'You cannot get far in these essays without sensing yourself in the presence of a writer of immense intellectual power and fierce independence of mind.' - Janet Soskice, from the Introduction to the Routledge Classics edition

Simone Weil (1909-1943) is one of the most brilliant and unorthodox religious and philosophical thinkers of the twentieth century. She was also a political activist who worked in the Renault car factory in France in the 1930s and fought briefly as an anarchist in the Spanish Civil War. Hailed by Albert Camus as 'the only great spirit of our times, ' her work spans an astonishing variety of subjects, from ancient Greek philosophy and Christianity to oppression, political freedom and French national identity.

Waiting for God is one of her most remarkable books, full of piercing spiritual and moral insight. The first part comprises letters she wrote in 1942 to Jean-Marie Perrin, a Dominican priest, and demonstrate the intense inner conflict Weil experienced as she wrestled with the demands of Christian belief and commitment. She then explores the 'just balance' of the world, arguing that we should regard God as providing two forms of guidance: our ability as human beings to think for ourselves; and our need for both physical and emotional 'matter.' She also argues for the concept of a 'sacred longing'; that humanity's search for beauty, both in the world and within each other, is driven by our underlying desire for a tangible god.

Eloquent and inspiring, Waiting for God asks profound questions about the nature of faith, doubt and morality that continue to resonate today.

This Routledge Classics edition includes a new Introduction by Janet Soskice and retains the Foreword to the 1979 edition by Malcolm Muggeridge.

Simone Weil (1909-1943) was one of the great theologians, philosophers and activists of the twentieth century. Her writings on the nature of religious faith, spirituality and philosophy have inspired many subsequent thinkers. Several of her other books, including The Need for Roots and Oppression and Liberty, are also available in Routledge Classics.
Loading...
or
Not Currently Available for Direct Purchase