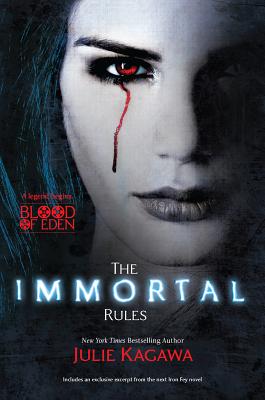 These vampires don't sparkle...they bite. Book 1 of the Blood of Eden trilogy by Julie Kagawa, New York Times bestselling author of The Iron Fey, begins a thrilling dark fantasy series where vampires rule, humans are prey...and one girl will become what she hates most to save all she loves. Allison Sekemoto survives in the Fringe, where the vampires who killed her mother rule and she and her crew of outcasts must hide from the monsters at night. All that drives Allie is her hatred of vampires, who keep humans as prey. Until the night Allie herself dies...a becomes one of the monsters. When she hears of a mythical place called Eden that might have a cure for the blood disease that killed off most of civilization, Allie decides to seek it out. Hiding among a band of humans, she begins a journey that will have unforeseen consequences...to herself, to the boy she's falling for who believes she's human, and to the future of the world. Now Allie must decide what--and who--is worth dying for...again. "A fresh and imaginative thrill ride." --Publishers Weekly, starred review Books in the Blood of Eden series:
The Immortal Rules
The Eternity Cure
The Forever Song


Praise For The Immortal Rules (Blood of Eden #1)…

Allie is a terrific heroine-tough, pragmatic, yet sympathetic-and readers will be hungry to see where her story goes. Kagawa wraps excellent writing and skillful plotting around a well-developed concept and engaging characters, resulting in a fresh and imaginative thrill-ride that deserves a wide audience.


quandaries, and laced with an impossible romance, this first in the Blood of Eden series will hit the mark

with readers who like some supernatural in their dystopias and don't mind a bloody sword fight." -- Booklist

"Allie's a smart, strong and compelling heroine, and readers will gladly join her for this adrenaline-rich ride."

Born in Sacramento, CA, Julie Kagawa moved to Hawaii at the age of nine. There she learned many things; how to bodyboard, that teachers scream when you put centipedes in their desks, and that writing stories in math class is a great way to kill time. Her teachers were glad to see her graduate. Julie now lives is Louisville, KY with her husband and furkids. She is the international and NYT bestselling author of The Iron Fey series. Visit her at juliekagawa.com.
Loading...
or
Not Currently Available for Direct Purchase