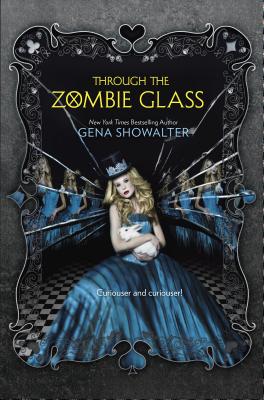 A modern-day Alice in Wonderland meets the undead...

Alice Bell has lost so much. Family. Friends. A home. She thought she had nothing else to give. She was wrong.

After a new zombie attack, strange things begin to happen to her. Mirrors come to life, and the whispers of the dead assault her ears. But the worst? A terrible darkness blooms inside her, urging her to do very wicked things.

She's never needed her team of zombie slayers more, but ultra bad-boy Cole Holland, the leader and her boyfriend, suddenly withdraws from her...from everyone. Now, with her best friend, Kat, at her side, Ali must kill the zombies, uncover Cole's secret and learn to fight the darkness.

But the clock is ticking...and if she fails at a single task, they're all doomed.

The White Rabbit Chronicles:
Alice in Zombieland
Through the Zombie Glass
The Queen of Zombie Hearts
A Mad Zombie Party


Praise For Through the Zombie Glass (White Rabbit Chronicles #2)…

"Showalter has created a promising playground for future story installments." --Kirkus Reviews on Alice in Zombieland


"[An] action-
packed paranormal story with a
giddy focus on the push-and-pull attraction
between Ali and Cole and the nastier
side of the high school social scene.
The result is a zippy story with crossover
appeal that highlights the power of
guilt, faith, and self-confidence." -- Publishers Weekly on Alice in Zombieland


"The action-oriented plot mixed with scenes of a passionate romance between Ali and Cole-and a new way to look at zombies (by fighting them in spirit form)-will be certain to delight fans of paranormal fantasy." --VOYA on Alice in Zombieland