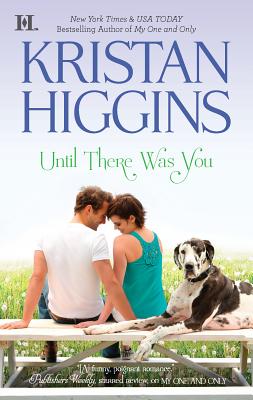 Until There Was You (Hqn Romance)

Posey Osterhagen can't complain. She owns a successful architectural salvaging company, she's surrounded by her lovable, if off-center, family and she has a boyfriend--sort of. Still, something's missing. Something tall, brooding and criminally good-looking...something like Liam Murphy. When Posey was sixteen, the bad boy of Bellsford, New Hampshire, broke her heart. But now he's back, sending Posey's traitorous schoolgirl heart into overdrive once again. She should be giving him a wide berth, but it seems fate has other ideas....

Praise For Until There Was You (Hqn Romance)…

"A funny, poignant romance....Readers will be cheering for Harper all the way."

- Publishers Weekly on My One and Only, starred review

TOO GOOD TO BE TRUE

"Cheeky, cute, and satisfying, Higgins's romance is perfect entertainment for a girl's night in."

CATCH OF THE DAY

"A touching story brimming with smart dialogue, sympathetic characters, an engaging narrative and the amusing, often self-deprecating observations of the heroine. It's a novel with depth and a great deal of heart."

Kristan Higgins is the RITA award-winning author of CATCH OF THE DAY and three other romantic comedies. Previously a copywriter, Kristan began writing fiction when her children graced her life with simultaneous naps...so much more satisfying than folding laundry. She holds a BA in English from the College of the Holy Cross, which enables her to identify dangling participles and quote many great novels. Kristan lives with her family in Connecticut.
Loading...
or
Not Currently Available for Direct Purchase