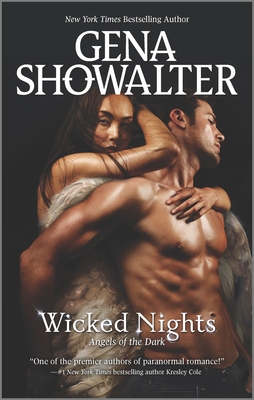 Wicked Nights (Angels of the Dark #1)

From the New York Times bestselling author who brought you the Lords of the Underworld comes a dark, seductive new series featuring angels poised on the brink of destruction.... Leader of the most powerful army in the heavens, Zacharel has been deemed nearly too dangerous, too ruthless--and if he isn't careful, he'll lose his wings. But this warrior with a heart of ice will not be deterred from his missions, at any cost...until a vulnerable human tempts him with a carnal pleasure he's never known before. Accused of a crime she did not commit, Annabelle Miller has spent four years in an institution for the criminally insane. Demons track her every move, and their king will stop at nothing to have her. Zacharel is her only hope for survival, but is the brutal angel with a touch as hot as hell her salvation--or her ultimate damnation?

Praise For Wicked Nights (Angels of the Dark #1)…

"One of the premiere authors of paranormal romance!"

"Showalter gives her fans another treat, sure to satisfy!"

"The versatile Showalter...once again shows that she can blend humor and poignancy while keeping readers entertained from start to finish."

-Booklist on Catch a Mate