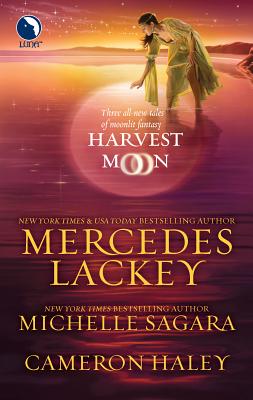 Three unforgettable new stories A Tangled Web by New York Times bestselling author Mercedes Lackey Kidnapping Persephone should have been an easy task. But in the Five Hundred Kingdoms, nothing's ever simple--and the wrong blonde goddess is stolen by mistake, leaving Prince Leopold without his new bride. At least until he braves the realm of the dead to get her back... Cast in Moonlight by New York Times bestselling author Michelle Sagara Barely a teenager, Kaylin Neya is a thief, a fugitive and an attempted assassin. She also has a smart mouth, sharp wits and mysterious markings on her skin. All of which make her perfect bait for a child prostitution sting in the city of Elantra--if she survives her first meeting with the Hawks Retribution by Cameron Haley In the underworld, there are tricks to killing. Like executing rivals at crossroads so ghosts won't follow you home. But sometimes retribution is hard to avoid--and now a supernatural hit man has a contract on Domino Riley's life. Luckily she knows a thing or two about death....

Praise For Harvest Moon: An Anthology…

"This Tale of the Five Hundred Kingdoms novel is a delightful

fairy-tale revamp. Lackey ensures that familiar stories are turned on their ear with amusing results."

"Sagara swirls mystery and magical adventure together with unforgettable characters in the fifth Chronicles of Elantra installment."


-Publishers Weekly on Cast in Silence

"Mob Rules is exciting and fresh, with a complex and conflicted heroine who grabs your attention and doesn't let go. This book will make you fall

in love with urban fantasy all over again!"

-Diana Rowland, author of Mark of the Demon