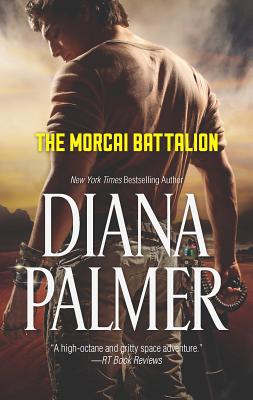 Drama and excitement explode in New York Times bestselling author DIANA PALMER's legendary first book in The Morcai Battalion series, now available in paperback, as a new expanded version. THE MORCAI BATTALION
In the very dream of peace lurked a monstrous treachery.
The galaxy is on the brink of disaster, a long-awaited truce torn apart by an unprovoked attack. The colony whose residents represented more than a hundred planets has been destroyed, and the new vision for unity in the universe is at risk. Faced with a war that would mean destruction and chaos, one man has stepped forward to lead those fighting for their lives. Undeterred by insurmountable odds, his courage inspires a team--the Morcai Battalion--to battle for the cause of peace...and love.


"...fans of stark outer space military science fiction will appreciate this sobering at war thriller."-- The Best Reviews on The Morcai Battalion

"Palmer...is the queen of desperado quests for justice and true love." -Publishers Weekly

The prolific author of more than one hundred books, Diana Palmer got her start as a newspaper reporter. A New York Times bestselling author and voted one of the top ten romance writers in America, she has a gift for telling the most sensual tales with charm and humor. Diana lives with her family in Cornelia, Georgia.
Loading...
or
Not Currently Available for Direct Purchase