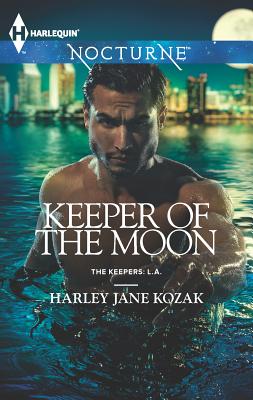 Keeper of the Moon

In their new Keeper roles, these extraordinary women must balance the fate of the world with their desires... Lust. Elven Keeper Sailor Gryffald's body quivers with it, but is it a symptom of the deadly Scarlet Pathogen coursing through her bloodstream or the proximity of shifter Keeper Declan Wainwright? Sailor and Declan have had an uneasy relationship ever since they met, and now things are about to get a lot more complicated. A killer is stalking Los Angeles, intentionally infecting Elven with the deadly virus, and now Sailor and Declan must work to keep the supernatural peace while bringing the murderer to justice. But, in doing so, these powerful denizens of the Otherworld find themselves straddling a fine line between lust...and love.

Harley Jane Kozak is an actress-turned-writer. She was born in Pennsylvania, the youngest of 8 children. When she was a baby, her father died and her mother moved the family to Nebraska to teach music. Harley first appeared onstage at the age of 5, and at 19 moved to New York to attend NYU's Graduate Acting Program, later starring in 3 soaps, 10 feature films, and numerous TV series. In the early 2000's she gave birth to 3 children and a novel, and the rest, as they say, is history.
Loading...
or
Not Currently Available for Direct Purchase