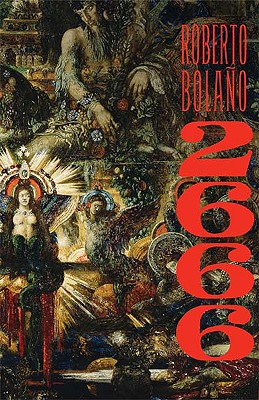 THE POSTHUMOUS MASTERWORK FROM "ONE OF THE GREATEST AND MOST INFLUENTIAL MODERN WRITERS" (JAMES WOOD, "THE NEW YORK TIMES BOOK REVIEW") Composed in the last years of Roberto Bolano's life, "2666 "was greeted across Europe and Latin America as his highest achievement, surpassing even his previous work in its strangeness, beauty, and scope. Its throng of unforgettable characters includes academics and convicts, an American sportswriter, an elusive German novelist, and a teenage student and her widowed, mentally unstable father. Their lives intersect in the urban sprawl of SantaTeresa--a fictional Juarez--on the U.S.-Mexico border, where hundreds of young factory workers, in the novel as in life, have disappeared.

“Bolaño’s masterwork . . . An often shockingly raunchy and violent tour de force (though the phrase seems hardly adequate to describe the novel’s narrative velocity, polyphonic range, inventiveness, and bravery) based in part on the still unsolved murders of hundreds of women in Ciudad Juárez, in the Sonora desert near the Texas border.” —FRANCISCO GOLDMAN, The New York Review of Books  “Not just the great Spanish-language novel of [this] decade, but one of the cornerstones that define an entire literature.” —J. A. MASOLIVER RÓDENAS, La Vanguardia  “One of those strange, exquisite, and astonishing experiences that literature offers us only once in a very long time . . . to see . . . a writer in full pursuit of the Total Novel, one that not only completes his life’s work but redefines it and raises it to new dizzying heights.” —RODRIGO FRESÁN, El País

"Bolano's savoir-faire is incredible ... The exploded narrative reveals a virtuosity that we rarely encounter, and one cannot help being bowled over by certain bravura passages--to single one out, the series of reports describing murdered young women, which is both magnificent and unbearable. We won't even mention the 'resolution' of this infernal 2666, a world of a novel in which the power of words triumphs over savagery." --Baptiste Liger, L'EXPRESS

"The event of the spring: with 2666 Roberto Bolano has given us his most dense, complex, and powerful novel, a meditation on literature and evil that begins with a sordid newspaper item in contemporary Mexico." --Morgan Boedec, CHRONIC ART

"Including the imaginary and the mythic alongside the real in his historiography, without ever dabbling in the magical realism dear to many of his Latin-American peers, Bolano strews his chronicle with dreams and visions. As in the films of David Lynch (with whom Bolano's novel shares a certain kinship) these become a catalyst for reflection ... In such darkness, one must keep one's eyes wide open. Bolano invites us to do just that." --Sabine Audrerie, LA CROIX

"An immense moment for literature ... With prodigious skill and his inimitable art of digression, Bolano leads us to the gates of his own hell. May he burn in peace." --TECHNIKART

"Bolano constructs a chaos that has an order all its own ... The state of the world today transmuted into literature." --Isabelle Ruf, LE TEMPS

"To confront the reader with the horror of the contemporary world was Bolano's guiding ambition. He succeeded, to say the least. Upset, shocked, sometimes even sickened, at times one is tempted to shut the book because it's unbearable to read. Don't shut it. Far from being a blood-and-guts thriller meant to entertain, 2666 is a 'visceral realist" portrait of the human condition in the twenty-first century." --Anna Topaloff, MARIANNE

"On every page the reader marvels, hypnotized, at the capacity of this baroque writer to encompass all literary genres in a single fascinating, enigmatic story. No doubt many readers will find 2666 inexhaustible to interpretation. It is a fully realized work by a pure genius at the height of his powers." --LIRE

"His masterpiece ... Bolano borrows from vaudeville and the campus novel, from noir and pulp, from science fiction, from the Bildungsroman, from war novels; the tone of his writing oscillates between humor and total darkness, between the simplicity of a fairytale and the false neutrality of a police report." --Minh Tran Huy, LE MAGAZINE LITTERAIRE (Paris)

"The book explores evil with irony, without any theory or resolution, relying on storytelling alone as its saving grace... Each story is an adventure: a fresco at once horrifying, delicate, grotesque, redundant, and absurd, revealed by the flashlight of a child who stands at the threshold of a cave he will never leave." --Philippe Lancon, LIBERATION

"If THE SAVAGE DETECTIVES recounted the end of a century of avant-gardes and ideological battles, 2666, more radically, evokes the end of humanity as we know it. Apocalyptic in this sense, wavering between decomposition and totality, endlessly in love with people and books, Bolano's last novel ranges over the world and history like the knight Percival, who in Bolano's words 'wears his fool's motley underneath his armor.'" --Fabienne Dumontet, LE MONDE DES LIVRES (Paris)

"A work of genius: a work of immense lucidity and narrative cunning, written with a unique mixture of creative power and intimate existential desperation, the work of a master whose voice has all the authority and seeming effortlessness that we associate with the great classics of the ages ... It is impossible to read this book without feeling the earth shift beneath one's feet. It is impossible to venture deep into writing so unforgiving without feeling inwardly moved--by a shudder of fear, maybe even horror, but also by its need to pay attention, by its desire for clarity, by its hunger for the real."   --Andres Ibanaz, BLANCO Y NEGRO

"Without a doubt the greatest of Bolano's productions ... The five parts of this masterwork can be read separately, as five isolated novels; none loses any of its brilliance, but what's lost is the grandeur that they achieve in combination, the grandeur of a project truly rare in fiction nowadays, one that can be enjoyed only in its totality." --Ana Maria Moix, EL PAIS

"Make no mistake, 2666 is a work of huge importance ... a complex literary experience, in which the author seeks to set down his nightmares while he feels time running out. Bolano inspires passion, even when his material, his era, and his volume seem overwhelming. This could only be published in a single volume, and it can only be read as one." --EL MUNDO

"An absolute masterpiece ... Bolano writes almost without adjectives, but in his prose this leads to double meanings. The narration is pure metonymy: it omits feelings in favor of facts. A phone call or a sex act can express real tragedy, the sweep of the vast human condition." --Andres Lomena, LA OPINION DE MALAGA

ROBERTO BOLANO was born in Santiago, Chile, in 1953. He grew up in Chile and Mexico City, where he was a founder of the infrarealist poetry movement. His first full-length novel, "The Savage Detectives," received the Herralde Prize and the Romulo Gallegos Prize when it appeared in 1998. Bolano died in Blanes, Spain, at the age of fifty. NATASHA WIMMER 's translation of "The Savage Detectives "was chosen as one of the ten best books of 2007 by "The Washington Post "and "The New York Times."