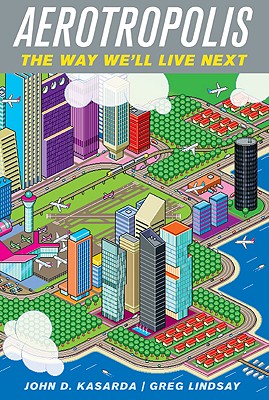 The Way We'll Live Next

This brilliant and eye-opening look at the new phenomenon called the aerotropolis gives us a glimpse of the way we will live in the near future and the way we will do business too.

Not so long ago, airports were built near cities, and roads connected the one to the other. This pattern the city in the center, the airport on the periphery shaped life in the twentieth century, from the central city to exurban sprawl. Today, the ubiquity of jet travel, round-the-clock workdays, overnight shipping, and global business networks has turned the pattern inside out. Soon the airport will be at the center and the city will be built around it, the better to keep workers, suppliers, executives, and goods in touch with the global market.

This is the aerotropolis: a combination of giant airport, planned city, shipping facility, and business hub. The aerotropolis approach to urban living is now reshaping life in Seoul and Amsterdam, in China and India, in Dallas and Washington, D.C. The aerotropolis is the frontier of the next phase of globalization, whether we like it or not.

John D. Kasarda defined the term "aerotropolis," and he is now sought after worldwide as an adviser. Working with Kasarda's ideas and research, the gifted journalist Greg Lindsay gives us a vivid, at times disquieting look at these instant cities in the making, the challenges they present to our environment and our usual ways of life, and the opportunities they offer to those who can exploit them creatively. "Aerotropolis "is news from the near future news we urgently need if we are to understand the changing world and our place in it.


Praise For Aerotropolis: The Way We'll Live Next…

“The days when we built our airports around cities now seem distant; in the new, mobile century, we build our cities around airports . . . Cities are becoming like airports—places to leave from more than to live in. I'd always sensed this, but it came home to me with almost shocking immediacy when I was reading the dazzling new book Aerotropolis. One of its authors, John F. Kasarda, is a business professor in North Carolina who flies from Amsterdam to Seoul preaching the gospel of building homes and businesses near airports. Co-author Greg Lindsay is a journalist who knows how to make Kasarda's research racy while raising questions about the cost of living in midair . . . Aerotropolis points out that we can still address the oldest needs but in new and liberating ways.” —Pico Iyer, Time

“I’d wager that the notion [of the aerotropolis] is about to occupy a little more real estate in the popular imagination. This book will no doubt do for airport cities what Joel Garreau and his “Edge City” did for suburban office parks and shopping malls two decades ago: It will relocate the center . . . The prospect sketched out in Aerotropolis—while slightly thrilling, as tectonic shifts often are—feels about as dispiriting as those warehouse zones clustered near the ends of runways. And it’s made all the more so by the realization that the authors are undoubtedly right.”        —Wayne Curtis, Wall Street Journal

“In Aerotropolis, John Kasarda of the University of North Carolina and his co-author, Greg Lindsay, convincingly put the airport at the centre of modern urban life.” —The Economist

“To find yourself at La Guardia Airport, that repository of bad food, dim lighting, unsettlingly indistinct odors and too-short runways, is to be inclined toward embracing John D. Kasarda and Greg Lindsay and all they have to say about the future of travel and modern life. Kasarda, a professor in the business school at the University of North Carolina who has consulted with four White House administrations and numerous cities and governments, believes that something very different from La Guardia is transforming our world . . . Kasarda’s theories are presented in the ambitious Aerotropolis: The Way We’ll Live Next, which is written by [Greg] Lindsay, who as the journalist onboard fulfills the role of eager messenger . . . [He] flies around the world, conducting interviews, seeking evidence, translating Kasarda’s technical jargon into a lively if sometimes flawed work of pop behavioral economics . . . Aerotropolis offers intriguing arguments.” —Michael Powell, The New York Times Book Review

“An odd, fascinating new book… an enthralling and only intermittently dogmatic tour of some of the gigantic, no-context sites that globalization has created, such as the all-night flower auction in Amsterdam that gets roses from Kenya to Chicago before they’ve wilted, the FoxConn factory in China where iPods and iPhones are made, and the mega-hospital Bumrungrad in Bangkok, which performs cut-rate major surgery on the uninsured from all over the world.” —Nicholas Lemann, The New Yorker

“Fascinating and important work . . . Aerotropolis follows in the tradition of works such as Edge City (1992) that blend jargon-free scholarship with shoe-leather reporting to tell readers why they’re living and working as they are . . . That Kasarda and Lindsay are onto something big seems beyond dispute.” —Paul M. Barrett, Bloomberg Businessweek

“An essential guide to the twenty-first century.” —Tom Vanderbilt, author of Traffic: Why We Drive the Way We Do (and What It Says About Us)

“Thanks to the manifold effects of modern aviation, earth and sky are merging in our world faster and more thoroughly than most people know. But you won’t be most people after reading Aerotropolis. Throw out your old atlas. The new version is here.” —Walter Kirn, author of Up in the Air

“A fascinating window into the complex emergent urban future. This book is an extremely sophisticated, often devastatingly witty and ironic interpretation of what is possible over the next two decades. It is not science fiction. It is science and technology in action. The authors have one foot firmly planted in the possible and foreseeable.” —Saskia Sassen, Professor, Columbia University, and author of Territory, Authority, Rights

“Aerotropolis presents a radical, futuristic vision of a world where we build our cities around airports rather than the reverse. This book ties together urbanism, global economics, international relations, sociology, and insights from adventures in places that aren't even on the map yet to present a plausible new paradigm for understanding how we relate to the skies. Perhaps the most compelling book on globalization in years.” —Parag Khanna, Senior Fellow, New America Foundation, and author of How to Run the World

“Very few people realize how profoundly air transport is changing our cities, our economies, our social systems, and our systems of governance. If you want to be way ahead of the curve in understanding one of the most important drivers of change for the twenty-first century, read this book.” —Paul Romer, Senior Fellow, Stanford Institute for Economic Policy Research

“Aerotropolis redraws the world map, using air routes to trace the new connections and competition between mega-regions that will shape the geography of the Great Reset. This lively, thought-provoking book is a must-read for anyone interested in how and where we will live and work in a truly global era.” —Richard Florida, director of the Martin Prosperity Institute, University of Toronto, and author of The Great Reset

“Aerotropolis comprehensively explains the enormous effects modern aviation has on cities and countries around the world. It is a unique resource.” —Frederick W. Smith, Chairman and CEO, FedEx Corporation

John D. Kasarda, a professor at the Kenan-Flagler Business School at the University of North Carolina, has advised countries, cities, and companies about the aerotropolis and its implications. He lives in Chapel Hill, North Carolina. Greg Lindsay has written for "Time," "BusinessWeek," and "Fast Company." For one story he traveled around the world by airplane for three weeks, never leaving the airport while on the ground. He lives in Brooklyn, New York.
Loading...
or
Not Currently Available for Direct Purchase