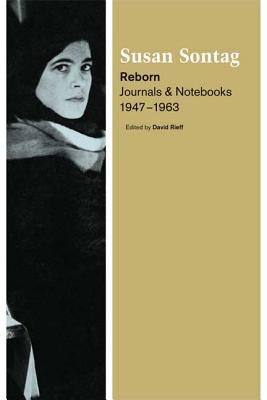 "I intend to do everything...to have one way of evaluating experience—does it cause me pleasure or pain, and I shall be very cautious about rejecting the painful—I shall anticipate pleasure everywhere and find it too, for it is everywhere! I shall involve myself wholly...everything matters!"

So wrote Susan Sontag in May 1949 at the age of sixteen. This, the first of three volumes of her journals and notebooks, presents a constantly and utterly surprising record of a great mind in incubation. It begins with journal entries and early attempts at fiction from her years as a university and graduate student, and ends in 1964, when she was becoming a participant in and observer of the artistic and intellectual life of New York City.

Reborn is a kaleidoscopic self-portrait of one of America's greatest writers and intellectuals, teeming with Sontag's voracious curiosity and appetite for life. We watch the young Sontag's complex self-awareness, share in her encounters with the writers who informed her thinking, and engage with the profound challenge of writing itself—all filtered through the inimitable detail of everyday circumstance.

“What ultimately matters about Sontag . . . is what she has defended: the life of the mind, and the necessity for reading and writing as ‘a way of being fully human.'” —Hilary Mantel, Los Angeles Times Book Review