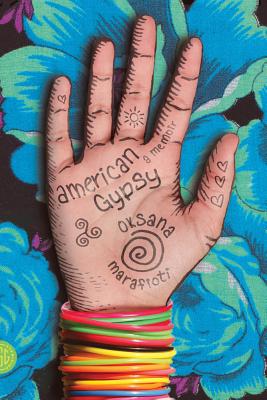 Fifteen-year-old Oksana Marafioti is a Gypsy. This means touring with the family band from the Mongolian deserts to the Siberian tundra. It means getting your hair cut in "the Lioness." It also means enduring sneering racism from every segment of Soviet society. Her father is determined that his girls lead a better, freer life. In America! Also, he wants to play guitar with B. B. King. And cure cancer with his personal magnetism. All of this he confides to the woman at the American embassy, who inexplicably allows the family entry. Soon they are living on the sketchier side of Hollywood.

What little Oksana and her sister, Roxy, know of the United States they've learned from MTV, subcategory George Michael. It doesn't quite prepare them for the challenges of immigration. Why are the glamorous Kraft Singles individually wrapped? Are the little soaps in the motels really free? How do you protect your nice new boyfriend from your opinionated father, who wants you to marry decently, within the clan?

In this affecting, hilarious memoir, Marafioti cracks open the secretive world of the Roma and brings the absurdities, miscommunications, and unpredictable victories of the immigrant experience to life. With unsentimentally perfect pitch, American Gypsy reveals how Marafioti adjusted to her new life in America, one slice of processed cheese at a time.


Praise For American Gypsy: A Memoir…

“Engaging . . . Marafioti describes with humor and introspection how the self-described ‘Split Nationality Disorder' she experienced growing up only magnified upon her family's emigration from the former Soviet Union to Los Angeles when she was 15 . . . Marafioti's probing observation of the contrast of American individualism with fierce Roma ethnocentrism, even xenophobia, yields a provocative exploration of identity. Contrasting cultural values shine in this winning contemporary immigrant account of assimilation versus individuation.” —Kirkus Reviews

“Beyond the usual stereotypes of thieves in caravans, this drama of finding a home at last strikes universal chords, not least with the hilarious family theatrics and the contemporary immigrant mess-ups . . . [A] wry, unforgettable memoir.” —Booklist

“[Oksana Marafioti's] witty, often hilarious account of her new life (not quite what MTV had promised) takes us for a ride through an immigrant's world, presenting the challenges of reconciling boyfriends, fast food, and séances with her family's strict Roma traditions.” —Annasue McCleave Wilson, Biographile

“An illuminating and unvarnished peek into a much-misunderstood culture, one that's been plagued for centuries by discrimination and worse. That said, while American Gypsy documents some dark and troubling events, it offers just as many funny and heartwarming moments.” —Geoff Schumacher, Las Vegas CityLife

“Oksana Marafioti's American Gypsy stands apart . . . A rare firsthand glimpse into the reality of contemporary Romani life.” —Ian Hancock, director of the Program of Romani Studies, the University of Texas at Austin

Oksana Marafioti moved from the Soviet Union when she was fifteen years old. Trained as a classical pianist, she has also worked as a cinematographer.
Loading...
or support indie stores by buying on