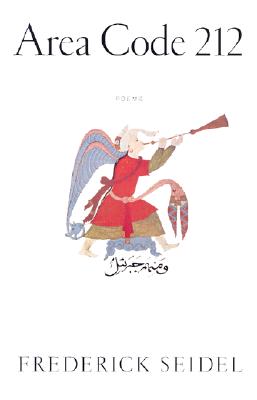 Area Code 212 is the journey's end in ice and flames of Seidel's brilliant Cosmos Poems trilogy. Reversing the order and outlook of Dante's Divine Comedy, Seidel's three-book series begins in the heavens (with The Cosmos Poems) and then descends steeply--through the Purgatory of Life on Earth, the second volume--to at last arrive at home, in Manhattan, with its famous area code.

"[Seidel] grips the twentieth century between his teeth like a blade as he speaks . . . One of the more formidable poets of the last third of the century." --Calvin Bedient, Poetry

"Unafraid of being unacceptable, Seidel emerges as an oddity, one of the rare poets who, in retelling a tale from Ovid's METAMORPHOSES, can say, 'Fuck the muse,' and still sing." --Brian Henry, The Threepenny Review

"The moral thrills of his poetry can be as daunting as the moral spills, the cruel intelligence of glamour as alluring as the mystical stillness that is somewhere also at the heart of his poetry . . . Here is the new kind of visionary, the person who really wants to change the world fast, the person who believes in something." --Adam Phillips, Raritan

"In an era that fancies itself particularly gender-tender, [this] poet doesn't pull his punches in accounts of encounters with women. His is a conspicuously male slant on matters of sexual engagement. As a woman, and more precisely as a woman alert to every stripe of lyric fire, I find myself more moved by Seidel's brutal, excruciated 'Recessional' . . . than by any of a thousand more conventional mournings. His work deserves more celebration than it gets." --Heather McHugh, Lingua Franca