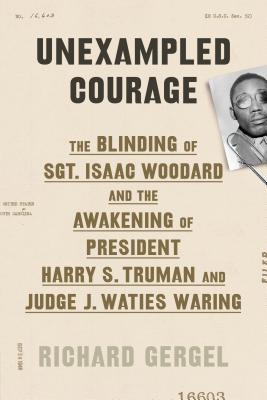 The Blinding of Sgt. Isaac Woodard and the Awakening of President Harry S. Truman and Judge J. Waties Waring

Richard Gergel’s Unexampled Courage details the impact of the blinding of Sergeant Woodard on the racial awakening of President Truman and Judge Waring, and traces their influential roles in changing the course of America’s civil rights history.

On February 12, 1946, Sergeant Isaac Woodard, a returning, decorated African American veteran, was removed from a Greyhound bus in Batesburg, South Carolina, after he challenged the bus driver’s disrespectful treatment of him. Woodard, in uniform, was arrested by the local police chief, Lynwood Shull, and beaten and blinded while in custody.

President Harry Truman was outraged by the incident. He established the first presidential commission on civil rights and his Justice Department filed criminal charges against Shull. In July 1948, following his commission’s recommendation, Truman ordered an end to segregation in the U.S. armed forces. An all-white South Carolina jury acquitted Shull, but the presiding judge, J. Waties Waring, was conscience-stricken by the failure of the court system to do justice by the soldier. Waring described the trial as his “baptism of fire,” and began issuing major civil rights decisions from his Charleston courtroom, including his 1951 dissent in Briggs v. Elliott declaring public school segregation per se unconstitutional. Three years later, the Supreme Court adopted Waring’s language and reasoning in Brown v. Board of Education.


Praise For Unexampled Courage: The Blinding of Sgt. Isaac Woodard and the Awakening of President Harry S. Truman and Judge J. Waties Waring…

"Remarkable . . . riveting . . . a revealing window into both the hideous racial violence and humiliation of segregation . . . and the heroic origin of the legal crusade to destroy Jim Crow . . . an engrossing history . . . The great value of Unexampled Courage is that it might garner a broad audience for the kinds of heroism involved in this history of litigation." —David W. Blight, The New York Times Book Review

"Gergel’s hallmark is an emphasis on how people at every level contribute to the making of history...He makes that point memorably in Unexampled Courage. Hopefully it will nurture the ground from which will arise more effective efforts in our own time to confront the ongoing menace of racially motivated police violence." —Randall Kennedy, The American Prospect

"Packed with overlooked history . . . Gergel recounts [the story of Sergeant Woodward] with compelling prose, revealing how a single injustice led to some of the nation’s most important civil rights victories." —Eric Deggans, NPR

“Gergel presents a compelling account of a case that helped point the way for broader, more intense, and more effective efforts in the civil rights movement.” —Jay Freeman, Booklist

“In this enlightening study, judge and historian Gergel illuminates the far-reaching effects of an individual act of cruelty . . . This is an important work on the prehistory of the civil rights struggle and an insightful account of how a single incident can inspire massive social and political changes.” —Publishers Weekly (starred)

“A federal judge from South Carolina examines a rarely mentioned 1946 race-based crime . . . Gergel is both an astute researcher and an engaging writer, bringing this significant story to vivid life . . . civil rights history at its most compelling.” —Kirkus Reviews (starred)

“Unexampled Courage, set in the Jim Crow South after World War II, recovers a pivotal moment in America’s civil rights movement. This remarkable story reminds us of the enduring power of the rule of law, even under the most daunting circumstances, when men and women stand for justice. A timely book; a monumental achievement.” —Henry Louis Gates, Jr., Alphonse Fletcher University Professor, Harvard University

“Drawing on his exhaustive investigation of the brutal encounter between a black soldier and a southern police officer, Richard Gergel widens the lens on a critical moment in American history. Unexampled Courage tells a riveting story about the personalities and forces that converged in the aftermath of World War II to fuel the movement that would dismantle Jim Crow and transform the nation.” —Patricia Sullivan, Professor of History at the University of South Carolina and author of Lift Every Voice: The NAACP and the Making of the Civil Rights Movement

“Unexampled Courage is a searing work of history that must be read in today’s America: an account of the fight for civil rights that reminds us just how much we depend on the bravery of a few to right the wrongs of the many. Reading it is an emotional journey. There are tears of rage, but also of admiration for the extraordinary courage of a brutalized and blinded black soldier; of a southern judge whose conscience drove him to oppose his racist heritage; and an American president who risked everything to do what he believed to be right at a time when the United States hoped its moral leadership would resonate around the world.” —Christopher Dickey, author of Our Man in Charleston

With his wife, Dr. Belinda Gergel, he is the author of In Pursuit of the Tree of Life: A History of the Early Jews of Columbia, South Carolina.