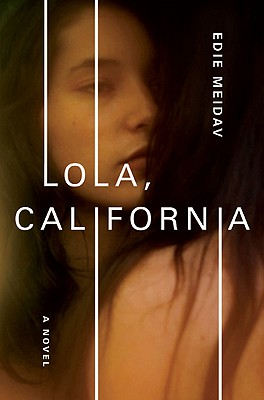 The year is 2008, the place California. Vic Mahler, famous for having inspired cult followers in the seventies, serves time on death row, now facing a countdown of ten days. For years, his daughter, Lana, has been in hiding. Meanwhile, her friend Rose, a lawyer, is determined to bring the two together.

When Rose succeeds in tracking down Lana at a California health spa, the two friends must negotiate land mines of memory in order to find their future. In sharp episodes infused with pathos and wit, Edie Meidav brings her acclaimed insight and poetry to the hope of friendship, parenthood, dystopia, and the legacy of the seventies. Lola, California speaks to our contemporary crisis of faith, asking: Can we survive too much choice?

Edie Meidav is the author of "The Far Field: A Novel of Ceylon" and "Crawl Space" (FSG, 2005). Winner of a Lannan Fellowship, a Howard Fellowship, the Kafka Prize for Fiction by an American Woman, and the Bard Fiction Prize, she teaches at Bard College.

“[A] gorgeous, audacious novel . . . Meidav’s prose is writerly: exact yet maximalist, prodigiously lyrical . . . The opposite of a page turner in the best way, the novel prompts us to linger, re-read, flip back, and figure the damned thing out . . . Lola, California is a startling novel, as prodigiously smart as it is technically proficient. Her characters may be narcissistic zeligs, but Meidav is an American original.” —Anne Trubek, The Daily Beast  “In the tightly written Lola, California, Edie Meidav explores the concept of personal choice through the story of a polemical scientist/author, his Feminist-theorist wife, their daughter, and the daughter’s best friend . . . But it’s Meidav’s unusual prose that is the star of this book. Her style is sculptural; she chips away at the text, dispensing with unnecessary words and punctuation, making even the longer sentences punchy and rhythmic. And in the same way that the characters all dance around the main issues, Meidav’s writing evokes a linguistic rope-a-dope.” —The Hipster Book Club “A decades-old murder in New Age-inflected Berkeley forces a reunion between two high-school best friends in Edie Meidav’s textured, disquieting third novel. Lola, California plumbs the rise and fall of a friendship, finding its terrifying resonance for the adults it produced.” —Ellen Wernecke, The AV Club “[Meidav’s] greatest gift in this novel is the element of surprise, which is a common trait among the best thriller writers but is more difficult to hatch in an artful social novel. Meidav creates a beautiful and true picture of female friendship, but as if that were not enough, she also keeps us guessing about who her characters really are, and how much weight their evaluations of each other actually hold.” —Liz Colville, The Daily  “Meidav succeeds brilliantly in creating an authentic friendship between Lana and Rose, one that is messy, captivating, and durable. The Lolas are their most powerful testament to each other, and to the writer herself.” —Michelle Koufopoulos, The Faster Times  “An intimate and lyrical look at the choices that bind friends and family together, yet also push them apart.” —Roni K. Devlin, Shelf Awareness  “In this intense and tumultuous tale, Meidav adeptly limns the dark and sinuous obsessions of friendship with penetrating insights.” —Carol Haggas, Booklist