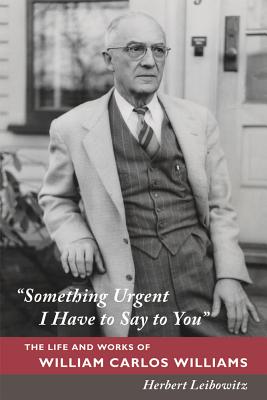 "Something Urgent I Have to Say to You"

The Life and Works of William Carlos Williams

Herbert Leibowitz's "Something Urgent I Have to Say to You" provides a new perspective on the life and poetry of the doctor poet William Carlos Williams, a key American writer who led one of the more eventful literary lives of the twentieth century. Friends with most of the contemporary innovators of his era-Ezra Pound, James Joyce, Ford Madox Ford, and Louis Zukofsky, among others-Williams made a radical break with the modernist tradition by seeking to invent an entirely fresh and singularly American poetic, whose subject matter derived from the everyday lives of the citizens and poor immigrant communities of northern New Jersey. His poems mirrored both the conflicts of his own life and the convulsions that afflicted American soci­ety-two world wars, a rampaging flu pan-demic, and the Great Depression.

Leibowitz's biography offers a compelling description of the work that inspired a seminal, controversial movement in American verse, as well as a rounded portrait of a complicated man: pugnacious and kindly, ambitious and insecure, self-critical and imaginative. "Something Urgent I Have to Say to You" is both a long-overdue assessment of a major American writer and an entertaining examination of the twentieth-century avant-garde art and poetry scene, with its memorable cast of eccentric pioneers, including Marcel Duchamp, Man Ray, Marianne Moore, and Gertrude Stein.


Praise For "Something Urgent I Have to Say to You": The Life and Works of William Carlos Williams…

“Mr. Leibowitz has written an acutely detailed, searching, and indeed discovering biography of an operose human being, the beloved New Jersey doctor and poet (and novelist and patriot-critic and autobiographer) William Carlos Williams, whose ever-provisional, always exploratory, and often experimental art was invariably committed to the illusive presentment of simplicity, familiarity, and even normality. Unlike any other studies of this figure, Leibowitz's study of the good doctor Williams leaves us in no doubt of his troubled and troubling character. 'Something Urgent I Have to Say to You' is the first effectively intimate life-and-works study of a still uncertainly placed modern figure to offer a quandary, not a condolence call, a judgment that is neither a reassur­ance nor a bum's rush. Patiently yet sportively, Herbert Leibowitz enables us to make the first grown-up reading of a man who has hitherto been offered as an adolescent hero or a childish hooligan. A valuable achievement!” —Richard Howard

“Besides being a famously exacting editor, Herbert Leibowitz is a writer of exceptional gifts--elegant prose, critical sensitivity, keen empathy, and narrative grace. In the protean career of William Carlos Williams, he has found his ideal subject. His search­ing account of Williams's life and personality, as seen through the prism of his work, makes for irresistible reading.” —Morris Dickstein, author of Dancing in the Dark: A Cultural History of the Great Depression

“In ‘Something Urgent I Have to Say to You' Williams--inarguably a twentieth-century American master--is lovingly (but not uncritically) assessed in a twenty-first-century masterpiece of literary biography and analysis. With a fan's enthusiasm and a scholar's rigor, Herbert Leibowitz has given us a bountiful, beautiful project-of-a-lifetime book, the capacious embrace of which is made all the more amazing and all the more enduring by its author's own sentence-by-sentence demonstration of verbal solidity wedded to verbal felicity.” —Albert Goldbarth

Herbert Leibowitz has been the editor of the literary magazine Parnassus since he helped found it in 1973. He is author of "Something Urgent I Have to Say to You": The Life and Works of William Carlos Williams. He lives in New York.
Loading...
or support indie stores by buying on
(This book is on backorder)