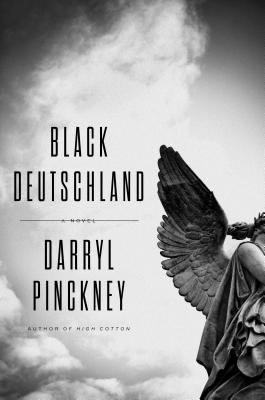 An intoxicating, provocative novel of appetite, identity, and self-construction, Darryl Pinckney's Black Deutschland tells the story of an outsider, trapped between a painful past and a tenebrous future, in Europe's brightest and darkest city.

Jed—young, gay, black, out of rehab and out of prospects in his hometown of Chicago—flees to the city of his fantasies, a museum of modernism and decadence: Berlin. The paradise that tyranny created, the subsidized city isolated behind the Berlin Wall, is where he's chosen to become the figure that he so admires, the black American expatriate. Newly sober and nostalgic for the Weimar days of Isherwood and Auden, Jed arrives to chase boys and to escape from what it means to be a black male in America.

But history, both personal and political, can't be avoided with time or distance. Whether it's the judgment of the cousin he grew up with and her husband's bourgeois German family, the lure of white wine in a down-and-out bar, a gang of racists looking for a brawl, or the ravaged visage of Rock Hudson flashing behind the face of every white boy he desperately longs for, the past never stays past even in faraway Berlin. In the age of Reagan and AIDS in a city on the verge of tearing down its walls, he clambers toward some semblance of adulthood amid the outcasts and expats, intellectuals and artists, queers and misfits. And, on occasion, the city keeps its Isherwood promises and the boy he kisses, incredibly, kisses him back.


Praise For Black Deutschland: A Novel…

"Never without charm . . . The book's form, like its prose, is ambitious, risky . . . The novel is full of wondrous things—several genial character portraits, funny and exact depictions of West Berlin, [and] beautiful evocations of Chicago . . . Despite the gravity of Jed's burdens and dilemmas (race, success, sanity, America, Germany), the book's tone is comic, pleasingly spry, and the prose breaks naturally into witty one-liners [and] perfected wisdom." —The New Yorker

“Without a hint of sloganeering, Pinckney evokes in these scenes a melancholia that transcends his narrator, achieving something rare in fiction—an ­honestly-come-by sense of cultural and political sadness. . . . a significant contribution.” —Adam Haslett, The New York Times

"Pinckney writes with profound understanding . . . It's hard to think of a recent novel that so vividly and sensually brings to life a time and place . . . In recent years, Baldwin has come zooming back into American life because we all wish he were here to dress down the racism so rampant in this country. But there’s more to him than being a quotable stick to swing at police videos. In this gorgeous novel, Pinckney demonstrates what that is by carrying the great writer’s project forward." —John Freeman, The Boston Globe

"Vibrant . . . Pinckney improvises and revises the form he’s adopted, avoiding the temptation to lead Jed to easy resolution. In a novel about escaping the confines of home, family, racial narratives, and self-loathing, he argues that accepting those constraints is vital for the narrative of the autobiographical self to emerge. While Pinckney’s prose and formal approach in Black Deutschland point to literary ancestors like W.E.B. Du Bois, James Baldwin, Elizabeth Hardwick, and Christopher Isherwood, the avuncular influence of the Harlem Renaissance writer Claude McKay is perhaps most strongly felt." —Walton Muyumba, The Atlantic

"Black Deutschland not only channels Isherwood, but also suggests Ellison's Invisible Man and Teju Cole's more recent Open City—each one the tale of an outsider whose sharp observations and sometimes sardonic humor are partly made possible because all three are more comfortable watching than participating . . . Each of [Pinckney's] vignettes comes our way through writing that's consistently trenchant and fresh . . . Writing like that makes it easy to keep faith with Black Deutschland and its lonely protagonist, even as he struggles to believe in either the world or himself." —Mike Fischer, The Milwaukee Journal Sentinel

"What's never in doubt is how deeply you're immersed in Jed's impulsive, if occasionally deluded mind . . . For readers up for a fiendishly tricky tour of 20th-century gay, racial and Cold War history and politics, Black Deutschland is a must." —Michael Upchurch, The Seattle Times

"Black Deutschland is a bildungsroman in which all is in flux: identity, sexuality, family, place—even time itself . . . No one is quite who they claim to be, or aim to be. Nor are there any glib resolutions . . . A life and a self are many things—pain and ecstasy, both fleeting, both true." —Dotun Akintoye, O, The Oprah Magazine

"What sustains your attention . . . is Pinckney's dolefully witty and incisively observant voice, whether describing the quirks of his hero's family ('When the going gets rough, make pancakes,' Jed's father advises) or evoking the sights, sounds, and even smells of West Berlin, 'the involuntary island, that petri dish of romantic radicalism.' Pinckney's discursive novel, coming across as if it were a late-20th-century hipster version of Rilke'sThe Notebooks of Marte Laurids Brigge, typifies an era in which inventive, idiosyncratic styles flourish anew in African-American writing." —Kirkus Reviews

“Black Deutschland is beautifully written, the mature work of a major novelist. Darryl Pinckney has crafted a novel that masterfully interrogates ideas of home and away, past and present, and community and isolation, with the clarity, courage, and complexity that only a gifted artist can.” —Henry Louis Gates, Jr.

"This is the book we have been waiting for since we read the Berlin Stories of Christopher Isherwood, although we had no reason to assume it would ever be written. Darryl Pinckney is an unlikely pioneer: a black writer from Indiana who somehow ended up in the divided city of the seventies and eighties and fell in love with it, an alien equipped with Isherwood's curiosity and sharp eye for Berlin's absurdities, but far more open to his own passions and hangups--which allowed him to connect with the unofficial soul of the city in those years. He is a poet gifted with a unique mix of melancholy and anarchic humor. We want him back." —Peter Schneider


“What Christopher Isherwood did for Weimar Berlin, Darryl Pinckney has done, more profoundly, for Berlin behind the wall. This haunted, rebuilt city is the perfect setting for an exploration of the artist as a young, black, gay man, unable to shake off his own troubled past. A beautiful book, witty, sophisticated, and intensely moving.” —Ian Buruma

“Pinckney has magically pulled off space-time travel into the heart of a young gay black American man living in West Berlin just before the Wall comes down. This book gives the intimate feel of that strange era of total freedom; what does a confused, lonely man do when he is finally free? For that matter, what does his wealthy, beautiful cousin (who speaks to him in German) do with her freedom? Here is the whole bohemian world of Berlin, living on the edge of a volcano.” —Edmund White

“The beauty and intelligence radiating from High Cotton are not a lucky hit by a talented beginner, but rather the considered achievement of a seasoned mind. Seasoning, of course, is no guarantee of originality, but Darryl Pinckney also has a distinctive voice and vision.” —Edmund White, The New York Times

“The style of High Cotton is tight and elliptical, packed with metaphor and allusion. One is richly rewarded, however, for taking one’s time. This writer’s debut as a novelist is an auspicious one.” —James Idema, Chicago Tribune

“An extraordinary achievement . . . This tender, often droll portrait of one young life is also an arrestingly mature, original account of the condition of being black through several generations and of America in the sixties—a major part of our history. It is also beautifully written, exhilaratingly intelligent, and a joy to read.” —Susan Sontag