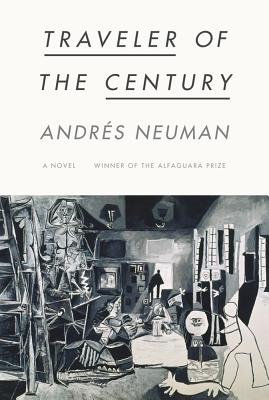 Traveler of the Century (Hardcover)

Searching for an inn, the enigmatic traveler Hans stops in a small city on the border between Saxony and Prussia. The next morning, Hans meets an old organ-grinder in the market square and immediately finds himself enmeshed in an intense debate on identity and what it is that defines us from which he cannot break free.

Indefinitely stuck in Wandernburg until his debate with the organ-grinder is concluded, he begins to meet the various characters who populate the town, including a young freethinker named Sophie. Though she is engaged to be married, Sophie and Hans begin a relationship that defies contemporary mores about female sexuality and what can and cannot be said about it.

"Traveler of the Century "is a deeply intellectual novel, chock-full of discussions about philosophy, history, literature, love, and translation. It is a book that looks to the past in order to have us reconsider the conflicts of our present. The winner of Spain's prestigious Alfaguara Prize and the National Critics Prize, "Traveler of the Century "marks the English-language debut of Andres Neuman, a writer described by Roberto Bolano as being "touched by grace.

Andres Neuman was born in 1977 in Buenos Aires, Argentina, and grew up in Spain. He has a degree in Spanish philology from the University of Granada. Neuman was selected as one of "Granta"'s Best of Young Spanish-Language Novelists and was elected to the Bogota-39 list. "Traveler of the Century "was the winner of the Alfaguara Prize and the National Critics Prize, Spain's two most prestigious literary awards."

Praise For Traveler of the Century…

“Traveller of the Century doesn’t merely respect the reader’s intelligence: it sets out to worship it. An unusual talent is required to pull this off, and Neuman has it . . . A beautiful, accomplished novel: as ambitious as it is generous, as moving as it is smart.” —Juan Gabriel Vásquez, author of The Sound of Things Falling, in The Guardian

“There should have been a sign at the entrance of the town, or on the first page of the book, that says, "Welcome to Fearless Imagination". For that is precisely what Neuman gives us: a plot throbbing with verve, characters as unusual as they are familiar, scenes that combine the carnal with the intellectual, dialogues that flow beautifully and, most of all, a subtle yet strong energy that pervades the entire narrative. Neuman's writing is a graceful waltz between things we are used to seeing as "opposites": the mind and the heart, the literary and the sexual, the political and the philosophical, ideas and emotions. He has a discerning eye for the foibles of human existence and yet an unwavering compassion for, and understanding of, them. Rarely comes a novel that blends poetry, history, philosophy, semantics, politics, a murder mystery – and love, that too – with such skill.” —Elif Shafak

“A deeply erudite but wickedly entertaining novel, with passion as well as reason in the mix, this tour de force from the Argentinian-born prodigy matches charming plot-twists with mind-stretching dialectic. In a captivating translation by Nick Caistor and Lorenza Garcia, it heralds the arrival in English of a first-class literary traveller.” —Boyd Tonkin, The Independent

“Good readers will find something that can be found only in great literature, the kind written by real poets, a literature that dares to venture into the dark with open eyes and that keeps its eyes open no matter what . . . The literature of the twenty-first century will belong to Neuman and a few of his blood brothers.” —Roberto Bolaño

“This is above all a novel of ideas, of heady conversation, of intellect. Which, fortunately, does not make it any less riveting . . . Traveler of the Century is like the wandering city in which the traveler finds he cannot escape, a place to get lost in.” —Stephen Sparks, Three Percent

“A book so filled with life and ideas and pleasure, a book that contemplates what it means to wake up and wander as well as what it means to settle down in repose. Traveler of the Century is a long of delights.”—The Mookse and the Gripes

“Traveler of the Century has already achieved impressive things for its young author in Spain and elsewhere, but this by no means guarantees its success in the litmus test of the English-speaking world, famously resistant to literature in translation. We cannot predict how this book will be received in the months and years to come, but there is little doubt in my mind that it deserves its place in the sun, as a work of true beauty and scintillating intelligence by a writer of prodigious talents. On the evidence of Traveler of the Century, we might well be convinced by Roberto Bolaño’s much-vaunted prediction that the literature of the 21st century will belong to Neuman and a handful of his blood brothers. Whatever one’s opinion of such elevated claims, books as stimulating, erudite, and humane as this do not come along very often.” —Richard Gwyn, The Independent


“There are moments here of exhilarating beauty [in Traveler of the Century] . . . Andrés Neuman writes about history and literature and the relation between them with an intelligence that his American contemporaries cannot match. His first book in English must not be his last.” —Michael Gorra, The New Republic


“An exceptional, fun, mature novel from a writer wise beyond his years.” —The Guardian (UK)

“Traveller of the Century takes on big ideas, and does so with an acuity that raises it to the level of great literature.” —Michael Patrick Brady, Boston Globe

“Traveler of the Century is astonishingly complex in its theological, metaphysical and scientific interests . . . Reading the book, I was mesmerized by Neuman’s attention to historical detail and his patience with the circumvolutions of the human mind . . . I love this book, and not only because of its melodic cadence, superbly rendered by translators Nick Caistor and Lorenza García . . . Neuman, an Argentine writer, has given us a lesson on how to transcend what Borges called ‘our provincialism’—the obsession with looking at our immediate environment as the only explanation of who we are: He has written a book about the world-less world of ideas.” —Ilan Stavans, The Jewish Daily Forward

“The novel flirts with genre and style, oscillating between romance, thriller, classic historical fiction, poetry, magic realism, and epistolary forms. Ultimately, though, Traveler of the Century is a love story . . . Hans and Sophie’s amorous rendezvous are rendered with the couple wrapped in collaborative translation as their affections and their shared passion for language become one.” —Ben Kupstas, The L Magazine

“[With Traveler of the Century] Neuman has achieved the dream of every novelist: the Total Novel, a venture accomplished only by major authors like Tolstoy, Musil, and Faulkner.” —Miguel García-Posada, Abc (Spain)

“One of the best novels that I have read in a long time.” —Santos Sanz Villanueva, Mercurio (Spain)

“The work of a master of narrative art.” —José RiÇo Direitinho, Público (Portugal)

“[Neuman’s] Wandernburg is as mobile and conceptual as a Calvino city, as metaphorical as a Borges country, as cheerful as García Márquez’s Macondo . . . Neuman, with Traveler of the Century, has multiplied the literary language and created a classic.” —Daria Galateria, La Repubblica (Italy)

“ A masterpiece . . . Neuman is not only brilliant news for Latin American literature, but for European literature as well.” —Maarten Steenmeijer, Volkskrant (Netherlands)

“Neuman was singled out for praise by Roberto Bolaño and it’s easy to see why: like that late author, Neuman combines love and intrigue with serious intellectual engagement. A novel of ideas somewhere between Kafka’s The Castle and Thomas Mann’s The Magic Mountain, Neuman’s English-language debut is a rich deconstruction of the competing currents of history, less a postmodernist pastiche than proof that modernism is still alive in the Spanish-speaking world.” —Publishers Weekly