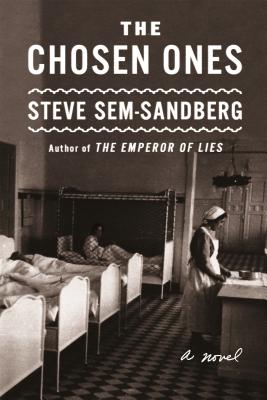 The Chosen Ones (Hardcover)

The Am Spiegelgrund clinic, in glittering Vienna, masqueraded as a well-intentioned reform school for wayward boys and girls and a home for chronically ill children. The reality, however, was very different: in the wake of Germany's annexation of Austria on the eve of World War II, its doctors, nurses, and teachers created a monstrous parody of the institution's benign-sounding brief. The Nazi regime's euthanasia program would come to determine the fate of many of the clinic's inhabitants.

Through the eyes of a child inmate, Adrian Ziegler, and a nurse, Anna Katschenka, Steve Sem-Sandberg, the author of the award-winning The Emperor of Lies, explores the very meaning of survival. An absorbing, emotionally overwhelming novel, rich in incident and character, The Chosen Ones is obliquely illuminated by the author's sharp sense of the absurd. Passionately serious, meticulously researched, and deeply profound, this extraordinary and dramatic novel bears witness to oppression and injustice, and offers invaluable and necessary insight into an intolerable chapter in Austria’s past.

Steve Sem-Sandberg was born in 1958. He divides his time between Vienna and Stockholm. He is the author of books including The Emperor of Lies.

Praise For The Chosen Ones: A Novel…

“A chilling and deeply affecting novel . . . exploring a particularly dark corner where other novelists have feared to tread . . . The Chosen Ones may be a tough read, but it is also a powerful and important one.” —Malcolm Forbes, The Minneapolis Star-Tribune

“Sem-Sandberg's precise, resolutely nonpoetic prose is highly effective, even in translation, and appears to be a conscious refusal of aestheticism: The brutality of the subject requires a brutal style.” —Susan Rubin Suleiman,The New York Times Book Review

“In this intensively researched historical novel, readers follow Sem-Sandberg (and his adept translator) into a nightmarish Nazi inversion of medicine . . . A harrowing chronicle.” —Booklist (starred review)

“With a gift for finding humanity in even the darkest of stories, Sem-Sandberg has written an indelible, moving novel.” —Publishers Weekly (starred, boxed review)

“A horror novel, of a sort, in which Swedish novelist Sem-Sandberg (The Emperor of Lies, 2011) returns to the Holocaust to limn its essential inhumanity . . . There is much evil in the book, and much of it is banal indeed. Making every word count, Sem-Sandberg explores the psychologies of captive and captor, the complexities of bearing witness to things that most people would sooner forget. A memorable meditation on the human capacity to do ill—and to endure.” —Kirkus Reviews