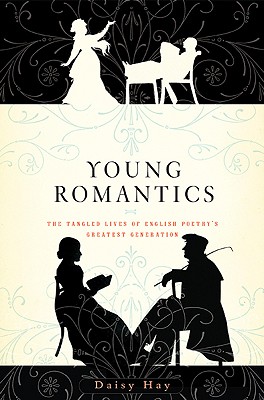 Young Romantics tells the story of the interlinked lives of the young English Romantic poets from an entirely fresh perspective—celebrating their extreme youth and outsize yearning for friendship as well as their individuality and political radicalism.

The book focuses on the network of writers and readers who gathered around Percy Bysshe Shelley and the campaigning journalist Leigh Hunt. They included Lord Byron, John Keats, and Mary Shelley, as well as a host of fascinating lesser-known figures: Mary Shelley’s stepsister and Byron’s mistress, Claire Clairmont; Hunt’s botanist sister-in-law, Elizabeth Kent; the musician Vincent Novello; the painters Benjamin Haydon and Joseph Severn; and writers such as Charles and Mary Lamb, Thomas Love Peacock, and William Hazlitt. They were characterized by talent, idealism, and youthful ardor, and these qualities shaped and informed their politically oppositional stances—as did their chaotic family arrangements, which often left the young women, despite their talents, facing the consequences of the men’s philosophies.

In Young Romantics, Daisy Hay follows the group’s exploits, from its inception in Hunt’s prison cell in 1813 to its disintegration after Shelley’s premature death in 1822. It is an enthralling tale of love, betrayal, sacrifice, and friendship, all of which were played out against a background of political turbulence and intense literary creativity.