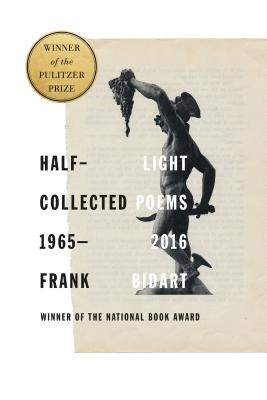 Gathered together, the poems of Frank Bidart perform one of the most remarkable transmutations of the body into language in contemporary literature. His pages represent the human voice in all its extreme registers, whether it’s that of the child-murderer Herbert White, the obsessive anorexic Ellen West, the tormented genius Vaslav Nijinsky, or the poet’s own. And in that embodiment is a transgressive empathy, one that recognizes our wild appetites, the monsters, the misfits, the misunderstood among us and inside us. Few writers have so willingly ventured to the dark places of the human psyche and allowed themselves to be stripped bare on the page with such candor and vulnerability. Over the past half century, Bidart has done nothing less than invent a poetics commensurate with the chaos and appetites of our experience.

Half-light encompasses all of Bidart’s previous books, and also includes a new collection, Thirst, in which the poet austerely surveys his life, laying it plain for us before venturing into something new and unknown. Here Bidart finds himself a “Creature coterminous with thirst,” still longing, still searching in himself, one of the “queers of the universe.”

WINNER OF THE 2018 PULITZER PRIZE IN POETRY

WINNER OF THE 2017 NATIONAL BOOK AWARD FOR POETRY

"[Half-light] comprises fifty years' worth of daring, revelatory poems. For me, it's the book not just of the year but of the decade." —Garth Greenwell, Bookforum

"[Frank Bidart's] poetry over five decades has volubly modeled a wholly new approach to autobiographical material, chiefly by giving voice to the inner travails of other people's lives, both real and imagined . . . The publication of Half-light: Collected Poems 1965–2016 gives readers a chance to see how Bidart, ill content merely to 'say what happened' in prefab stanzas, performs a poetry of 'embodiment' . . . Throughout his career, Bidart's self-devoting genius has been his ability to transform a poem into a vocalized (albeit anguished) performance of consciousness and moral interrogation, an occasion for metaphysical speculation as intense and oracular as any Shakespearean monologue or philosophical treatise . . . Sublime . . . Mesmerizing . . . ." —Major Jackson, The New York Times Book Review

"Made up of the seventy-eight-year-old author’s eight previous volumes of verse and a new sequence—the bold and elegiac Thirst—Half-light is both the culmination of a distinguished career and a poetic ur-text about how homophobia, doubt, and a parent’s confusing love can shape a gay child . . . The collection is a fraught song of the self, composed of subtleties and exclamations . . . True emotion demands a dialogue, and, like James Merrill’s extraordinary work The Changing Light at Sandover, Bidart’s poems are a kind of séance, one in which he tries to invoke and communicate love, even if that love can no longer be achieved, tasted, seen, touched." —Hilton Als, The New Yorker

"Frank Bidart has long challenged readers—and convention—with a complexity and originality not often seen in American poetry. Now with Half-light: Collected Poems 1965–2016, readers can gain a deeper understanding of how Bidart’s writing works together to create a vast, manifold narrative . . . The book closes with an ambitious section of new writing that deals with mortality and remembered friendships, a fitting way to end this monumental work." —Elizabeth Lund, The Washington Post

"A massive book that covers 50 years of words, Bidart’s collected contains enough routes and themes to produce years of reading. His style—capitalized words, italics, shifting speakers, personae, autobiography—result in a modern mythmaker who channels the old masters. A poet finely attuned to the contours of sensuality, he can simultaneously be spare and weighty." —Nick Ripatrazone, The Millions

"Frank Bidart's Collected Poems is a true monument—not only the sum of fifty years as one of America’s leading poets, but also the release of a new collection (an event in itself) titled Thirst. Bidart is likely best known for the characters he puts into his poems . . . and the Collected is an opportunity to view these monologues all in conversation. It is also a chance to take stock of his innovations in poetic form—how they have developed throughout his career and how they have influenced the literary world. This is a big, big book—well over 700 pages—one to take one’s time with and to savor." —Scott Esposito, Lit Hub

"Half-light is a tremendous literary event. One of the undisputed master poets of our time, Frank Bidart eats and breathes the high culture of the twentieth century, from the music of Callas and Edith Piaf to the monuments of classic cinema. But Bidart is no mere aesthete; for him, art is a supreme life force, water in the desert of the soul, a talisman against oblivion.’ —Craig Morgan Teicher, NPR.org

"Relentless and ever willing to face his demons, no matter how terrifying, in the interest of making great art, Bidart is, to my ear, one of the very few major living poets who never wavers, never repeats himself (though he has always orbited the same concerns), and extends his questing and questioning through each new work. This collected poems is an almost overwhelming bounty, a permanent book." —Publishers Weekly

Frank Bidart is the author of Metaphysical Dog (FSG, 2013), Watching the Spring Festival (FSG, 2008), Star Dust (FSG, 2005), Desire (FSG, 1997), and In the Western Night: Collected Poems 1965-90 (FSG, 1990). He has won many prizes, including the Wallace Stevens Award, the 2007 Bollingen Prize in American Poetry, and the National Book Critics Circle Award. His book Half-Light: Collected Poems 1965-2016 won the 2018 Pulitzer Prize and the 2017 National Book Award. He teaches at Wellesley College and lives in Cambridge, Massachusetts.
Loading...
or
Not Currently Available for Direct Purchase