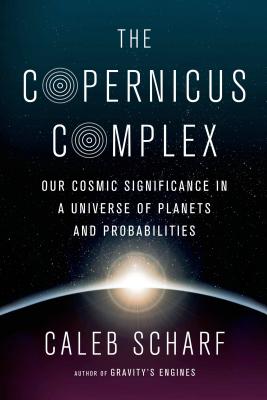 In the sixteenth century, Nicolaus Copernicus dared to go against the establishment by proposing that Earth rotates around the Sun. Having demoted Earth from its unique position in the cosmos to one of mediocrity, Copernicus set in motion a revolution in scientific thought. This perspective has influenced our thinking for centuries. However, recent evidence challenges the Copernican Principle, hinting that we do in fact live in a special place, at a special time, as the product of a chain of unlikely events. But can we be significant if the Sun is still just one of a billion trillion stars in the observable universe? And what if our universe is just one of a multitude of others-a single slice of an infinity of parallel realities?

In The Copernicus Complex, the renowned astrophysicist Caleb Scharf takes us on a scientific adventure, from tiny microbes within the Earth to distant exoplanets, probability theory, and beyond, arguing that there is a solution to this contradiction, a third way of viewing our place in the cosmos, if we weigh the evidence properly. As Scharf explains, we do occupy an unusual time in a 14-billion-year-old universe, in a somewhat unusual type of solar system surrounded by an ocean of unimaginable planetary diversity: hot Jupiters with orbits of less than a day, planet-size rocks spinning around dead stars, and a wealth of alien super-Earths. Yet life here is built from the most common chemistry in the universe, and we are a snapshot taken from billions of years of biological evolution. Bringing us to the cutting edge of scientific discovery, Scharf shows how the answers to fundamental questions of existence will come from embracing the peculiarity of our circumstance without denying the Copernican vision.

With characteristic verve, Scharf uses the latest scientific findings to reconsider where we stand in the balance between cosmic significance and mediocrity, order and chaos. Presenting a compelling and bold view of our true status, The Copernicus Complex proposes a way forward in the ultimate quest: determining life's abundance, not just across this universe but across all realities.


Praise For The Copernicus Complex: Caleb A. Scharf…

A Best Book of the Year, Physics World

“If you want a compact and engaging survey of what we actually know about the possibilities involved with life in the universe, this is an excellent read.” —Chad Orzel, Uncertain Principles

“[A] tantalising approach to the mysteries of the universe.” —Peter Forbes, The Independent (UK)

“When it comes to scientific thought-provocation, Scharf is there with Paul Feyerabend and Richard Feynman, Marie Curie and Peter Higgs . . . This book feels alive with spontaneity . . . [It] is near combustible with convivial--maybe even mad--energy.” —Barnes and Noble Review

“How reasonable is it to think that we are alone in the vast expanses of space? And how significant is life on Earth on the Universal (or multiversal) scale? These are the questions that astrobiologist Caleb Scharf addresses intelligently and comprehensively in his beautifully written The Copernicus Complex. The book offers a grand tour of important findings from astronomy to biology that are relevant to the cosmic and microscopic search for life.” —Mario Livio, Nature

“An enlightening read even for those people familiar with many of the astronomical and astrobiological topics discussed within.” —Jeff Foust, The Space Review

“Engrossing and accessible . . . The Copernicus Complex offers an invigorating, absorbing glimpse into the profundities of our very existence. With an engaging style and ample elucidatory prowess, Scharf beautifully conveys the latest cosmological insights whilst inspiring both wonder and awe. Although our place in the universe may well be 'unique but not exceptional,' our ability to parse meaning amidst its massivity is truly extraordinary.” —The Oregonian

“The Copernicus Complex delivers its argument with comparable clarity, insight and humour. There is much to enjoy along the way, including a compelling account of the extraordinary diversity of planetary systems we now know to exist.” —The Telegraph (UK)

“An intoxicating collection of questions answered with other questions, and startling discoveries that make creation even more mysterious . . . Books such as these remind us that we are lucky to be here at all, and even luckier to be here now.” —The Guardian (UK)

“Scharf covers a lot of ground, and his entertaining, accessible approach offers valuable insight not just into science, but also into the way our assumptions can make a difficult task, like finding life in the universe, even harder.” —Publishers Weekly

“This lyrical tale describes how we have opened our minds to appreciate our cosmic insignificance as we explore the true wonder of the cosmos, including the fascinating question of whether we are alone in the Universe. Caleb Scharf highlights the newly discovered possibilities for housing life in the cosmos, but--just as important--the new ways we might find out if it is out there. This voyage of discovery demonstrates that scientific progress requires us to transcend the often myopic intuition that evolution has saddled us with, and let nature be our guide.” —Lawrence M. Krauss, Foundation Professor and Director of the Origins Project at Arizona State University, bestselling author of A Universe from Nothing and The Physics of Star Trek

“The Copernicus Complex addresses a perennial mystery: the cosmic significance (or perhaps the insignificance) of life on Earth. Caleb Scharf summarizes current debates on how life began and how pervasive it is, explaining how our perspective has been changed by the recent discovery that there are millions of Earth-like planets in the Milky Way. He sets his theme in a historical context, writing in an engaging and accessible style.” —Martin Rees, author of Just Six Numbers and From Here to Infinity

“Sweeping in reach and lucid in exposition, The Copernicus Complex raises profound questions and offers provocative insights into our ongoing quest for life's cosmic context.” —Ray Jayawardhana, astrophysicist and author of Neutrino Hunters

“In a universe of infinite space, are we unique or mediocre? Caleb Scharf has taken one of the most essential questions in all of science and philosophy and made it a compelling story of discovery. Combining a writer's flare for history and detail with the insight and range of a leading astrobiologist, Scharf not only gives us a scientific tour of life in the universe, he also offers his own original ideas for understanding our place in the cosmos.” —Adam Frank, Professor of Astrophysics, University of Rochester, NPR commentator and the author of The Constant Fire: Beyond the Science vs. Religion Debate.

“In The Copernicus Complex, Caleb Scharf beautifully explains the astrophysics and metaphysics at the frontier of the modern search for extraterrestrial life and intelligence. In this panoramic journey that stretches from the teeming microcosm within a single drop of water to the infinitudes of planets that orbit distant stars, Scharf assembles an authoritative and visionary argument that our place in the universe--our world, our lives, our time--may be far more special than most scientists have dared to dream. Read this book to find out how and why humanity could be on the cusp of cosmic significance.” —Lee Billings, author of Five Billion Years of Solitude

“Caleb Scharf beautifully describes the Copernican Revolution as a revolution in both senses of the word: it overthrew the reigning idea that humanity lives at the center of the universe, but it has brought us back around to a new recognition of how special our place in the grand scheme of things really is. As Scharf reveals, the universe appears to be eerily fine-tuned for life, and The Copernicus Complex is one of the most perceptive discussions I've read about that fact.” —George Musser, award-winning journalist and author of The Complete Idiot's Guide to String Theory

“The Copernicus Complex takes us on a wonderful journey, from the formation of stars, through the biological basis of life, to the present human condition. And on the way it tests the limits of the Copernican Principle: perhaps humankind's position in the Universe is not so ordinary after all.” —David J. Hand, author of The Improbability Principle

Caleb Scharf is the director of the Columbia Astrobiology Center. He writes the Life, Unbounded blog for Scientific American; has written for New Scientist, Science, and Nature, among other publications; and has served as a consultant for the Discovery Channel, the Science Channel, The New York Times, and more. Scharf has served as a keynote speaker for the American Museum of Natural History and the Rubin Museum of Art, and is the author of Extrasolar Planets and Astrobiology, winner of the 2011 Chambliss Astronomical Writing Award from the American Astronomical Society. He lives in New York City with his wife and two daughters.
Loading...
or
Not Currently Available for Direct Purchase