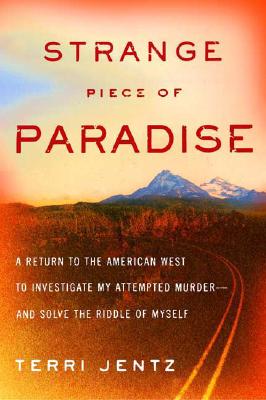 In the summer of 1977, Terri Jentz and her Yale roommate took a cross-country bike trip. As they lay sleeping in the central Oregon desert, a man in a pickup truck deliberately ran over their tent and proceeded to attack them with an axe. The horrific crime was reported in newspapers across the country, but no one was ever arrested. Fifteen years later, Jentz returns to the small town where she was nearly murdered and makes an extraordinary discovery: the violence of that night is as present for the community as it is for her. Shockingly, many say they know who did it, and he is living freely in their midst.

Powerful, eloquent, and paced like the most riveting of thrillers, Strange Piece of Paradise is a startling profile of a psychopath, a sweeping reflection on violence and the myth of American individualism, and a moving record of Jentz's brave inner journey from violence to hope.


Praise For Strange Piece of Paradise…

"Imagine that it had been Truman Capote himself who'd been savaged in Holcomb, Kansas, and that he had survived to describe his ordeal. That is the level of command and sinew at work in [Terri Jentz's] writing."--The New York Times Book Review

"Powerful . . . [Jentz] moves with great skill back and forth between the year of the attack and the years of her investigation."--Los Angeles Times Book Review

"Strange Piece of Paradise is a breathtaking memoir that deserves enshrinement on the essential books about the American West, worthy of a place beside Norman Mailer's classic account, The Executioner's Song."--Seattle Post-Intelligencer

"[Jentz's] well-crafted story of trying to make sense of lunacy is unforgettable."--People

"Jentz excels in capturing the aftermath of the attack. . . . [She] is a savvy, big-hearted narrator who refuses to rush to judgment. . . . A singular, breathtaking document of devastation, survival, and hard-won hope."--Newsday

"In her spellbinding, heartbreaking tale of one random act of carnage, Jentz shows how evil sometimes doesn't have a face but leaves scars both physical and emotional."--USA Today

"This book, a haunting meditation on the attack and Jentz's hunt for her would-be murderer, is like nothing I have ever read. . . . [Strange Piece of Paradise] packs the power of a story that has simmered for twenty years. Jentz's intelligence and felicity with language amp up that power; her detective work delivers real thrills. . . . Gratifying."--The Plain Dealer (Cleveland)

"The pacing and subject matter will keep readers mesmerized throughout. . . . An extraordinary story from a gifted writer."--Library Journal

"[Strange Piece of Paradise] will do more than just captivate us--it will also politicize us, change us, and move us to action."--Chicago Tribune