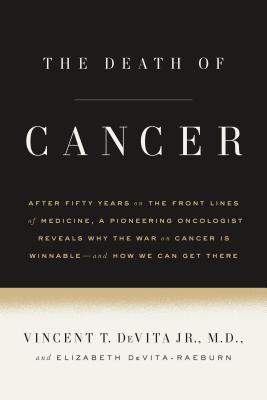 The Death of Cancer

After Fifty Years on the Front Lines of Medicine, a Pioneering Oncologist Reveals Why the War on Cancer Is Winnable--and How We Can Get There

Cancer touches everybody’s life in one way or another. But most of us know very little about how the disease works, why we treat it the way we do, and the personalities whose dedication got us where we are today. For fifty years, Dr. Vincent T. DeVita Jr. has been one of those key players: he has held just about every major position in the field, and he developed the first successful chemotherapy treatment for Hodgkin’s lymphoma, a breakthrough the American Society of Clinical Oncologists has called the top research advance in half a century of chemotherapy. As one of oncology’s leading figures, DeVita knows what cancer looks like from the lab bench and the bedside. The Death of Cancer is his illuminating and deeply personal look at the science and the history of one of the world’s most formidable diseases. In DeVita’s hands, even the most complex medical concepts are comprehensible.

Cowritten with DeVita’s daughter, the science writer Elizabeth DeVita-Raeburn, The Death of Cancer is also a personal tale about the false starts and major breakthroughs, the strong-willed oncologists who clashed with conservative administrators (and one another), and the courageous patients whose willingness to test cutting-edge research helped those oncologists find potential treatments. An emotionally compelling and informative read, The Death of Cancer is also a call to arms. DeVita believes that we’re well on our way to curing cancer but that there are things we need to change in order to get there. Mortality rates are declining, but America’s cancer patients are still being shortchanged—by timid doctors, by misguided national agendas, by compromised bureaucracies, and by a lack of access to information about the strengths and weaknesses of the nation’s cancer centers.

With historical depth and authenticity, DeVita reveals the true story of the fight against cancer. The Death of Cancer is an ambitious, vital book about a life-and-death subject that touches us all.


Praise For The Death of Cancer: After Fifty Years on the Front Lines of Medicine, a Pioneering Oncologist Reveals Why the War on Cancer Is Winnable--and How We Can Get There…

“For the past half century, [DeVita] has been at the forefront of the fight against one of the world’s most feared diseases, and in The Death of Cancer he has written an extraordinary chronicle . . . his conclusions are deeply unsettling. . . DeVita’s portrait of the way things were gives us a glimpse at what the future may look like.” —Malcolm Gladwell, The New Yorker

“In The Death of Cancer, Dr. DeVita (with his daughter Elizabeth DeVita-Raeburn) paints a portrait of a cancer industrial complex desperately in need of an overhaul, hampered by petty politics and power mongering, among much else . . . Powerful . . . There is no mistaking the value of the core idea he wants to convey: that doctors and researchers commit themselves anew to doing everything possible to help the patient.” —The Wall Street Journal

“An authoritative review of the history of surgery and radiation therapy . . . Ultimately, DeVita ably shows that the development of oncology as a modern specialty is a very human story.” —The New York Times Book Review

“This riveting, beautifully written, and poignant memoir takes us on an enormous journey—from cancer’s past to its future. Vincent T. DeVita Jr. brings us behind the scenes to the invention of breakthrough therapies for some forms of cancer in the 1960s and ’70s. He also provides a much-needed manifesto for the future.” —SIDDHARTHA MUKHERJEE, Pulitzer Prize–winning author of The Emperor of All Maladies

“An utterly absorbing memoir, fierce and frank . . . [T]he average reader will come away from the book with a superb basic education in all things oncological, from events on the cellular level to those in the rooms where research agendas are settled and checks are written.” —The New York Times

“If ever a book about cancer could offer hope for the future, it’s this one.” —New York Post

"[Dr. DeVita is] an eminent oncologist…[who]...became adept not only in cancer medicine but in cancer politics...DeVita rightly argues we are now at a much better place than we were in past decades.” —The New York Review of Books

"In this engaging, provocative, and deeply personal book, Vincent DeVita and Elizabeth DeVita- Raeburn provide a compelling insider's guideinto the personalities, organizations, and key protagonists that provided the backdrop and impetus for the unprecedented campaign known as the war on cancer. . . The Death of Cancer presents a candid and disarming critique of the ways in which medicine, and specifically oncology, is regulated in the United States.” —Science Magazine

“Great scientists are not always great writers, but this book is welcome exception, being well-crafted, compelling, transparent, and overall, optimistic.” —Lancet Oncology

“A fascinating memoir … Siddhartha Mukherjee called his Pulitzer Prize winning “The Emperor of All Maladies’’ a “biography” of the disease. “The Death of Cancer’’ is its obituary. We’re at “the beginning of the end,” DeVita declares of the war on cancer.” —The Boston Globe

“The Death of Cancer is an astonishingly good read. Written by a cancer expert who happens to be a cancer survivor as well, it deftly explains the treatments that have turned this insidious disease from a death sentence into a manageable chronic condition for millions of people—and what yet remains to be done. I devoured the book in two sittings, struck, page after page, by its insight, honesty, compassion, and plain common sense.” —DAVID M. OSHINSKY, Pulitzer Prize–winning author of Polio: An American Story

“The Death of Cancer is a fascinating insider history of the long battle against one of the world’s most feared diseases, told with both insight and frustration, and ultimately with hope. This collaboration between the former National Cancer Institute director Vincent T. DeVita Jr. and his talented science writer daughter, Elizabeth DeVita-Raeburn, results in a wonderfully human portrait of the scientists who join the fight and a wonderfully smart look at the ways we might actually win it.” —DEBORAH BLUM, New York Times–bestselling author of The Poisoner’s Handbook

“Superb science writing . . . One of the most absorbing and empowering science histories to hit the shelves in recent years.” —Kirkus Reviews (starred review)

"DeVita, an oncologist and professor at Yale School of Medicine, collaborates with his daughter DeVita-Raeburn on this engaging, informative, and inspiring history of DeVita’s prominent role in developing innovative cancer treatments . . . They also unveil some startling insights [and] offer salient advice . . . This remarkable memoir doesn’t just urge the public to have hope: it showcases the exciting evidence that we may finally be winning the war on cancer."
—Publishers Weekly (starred review)

Vincent T. DeVita Jr., M.D. is a professor of medicine, epidemiology, and public health at the Yale School of Medicine. He was the director of the National Cancer Institute and the National Cancer Program from 1980 to 1988. In 1988 he joined Memorial Sloan Kettering Cancer Center as the physician in chief. In 1993 he became the director of the Yale Cancer Center. At the NCI, he developed a cure for Hodgkin’s lymphoma with combination chemotherapy, proving that advanced cancers can be cured by drugs. He is a former president of the American Cancer Society and the coeditor of Cancer: Principles & Practice of Oncology, a textbook of cancer medicine.

Elizabeth DeVita-Raeburn has written about medicine, science, and psychology for many publications. She is the author of The Empty Room: Understanding Sibling Loss. She lives in New York City with her husband, the writer Paul Raeburn, and their two sons.