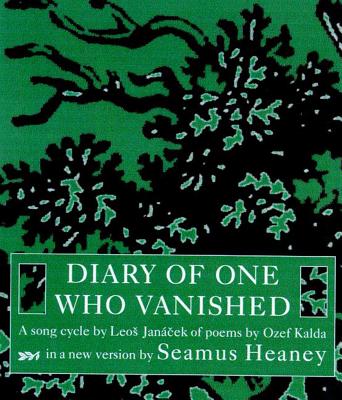 Diary of One Who Vanished

A Song Cycle by Leos Janacek of Poems by Ozef Kalda

A Cycle of Love Songs Translated by the Nobel Laureate

In 1917, while reading his local newspaper, the Czech composer Leos Janacek discovered the poems that he was to set to music in his song cycle Diary of One Who Vanished. Written by Ozef Kalda and published anonymously, they tell the story of a farmer's boy who abandons his home because he has fallen in love with a Gypsy. These new English versions by Seamus Heaney were commissioned by the English National Opera for a series of international performances, which opened in Dublin in October 1999.


Praise For Diary of One Who Vanished: A Song Cycle by Leos Janacek of Poems by Ozef Kalda…

“Pared to the bone in its simplicity . . . [it fills] the auditorium with the familiar cadences of folk song.” —The Economist

Ozef Kalda is the pseudonym of Josef Kalda (1871-1921), who was a prolific, genre-crossing writer from the Moravian Wallachia region of what is now the Czech Republic. He published the twenty-two poems that comprise The Diary of One Who Vanished anonymously in a newspaper in 1916.

Kalda's best-known works include the novel Ogan [The Lads] and the story collection Jalovinky [Idle Talk].

Leos Janacek (1854-1928) was a celebrated Czech composer, musicologist, and folklorist who pioneered the adaptation of national and regional folk tunes into modern musical compositions. Janacek took much of his inspiration from Moravian and slavic folk music, and was strongly influenced by Romantic composers including Wagner and Smetana. He was also one of the first opera composers to use prose rather than poetry verse. Janacek's most famous pieces include Jenufa, The Cunning Little Vixen, and an adaptation of Fyodor Dostoyevsky's From the House of the Dead.
Loading...
or
Not Currently Available for Direct Purchase