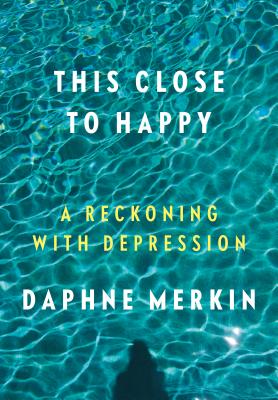 This Close to Happy

“Despair is always described as dull,” writes Daphne Merkin, “when the truth is that despair has a light all its own, a lunar glow, the color of mottled silver.” This Close to Happy—Merkin’s rare, vividly personal account of what it feels like to suffer from clinical depression—captures this strange light.

Daphne Merkin has been hospitalized three times: first, in grade school, for childhood depression; years later, after her daughter was born, for severe postpartum depression; and later still, after her mother died, for obsessive suicidal thinking. Recounting this series of hospitalizations, as well as her visits to myriad therapists and psychopharmacologists, Merkin fearlessly offers what the child psychiatrist Harold Koplewicz calls “the inside view of navigating a chronic psychiatric illness to a realistic outcome.” The arc of Merkin’s affliction is lifelong, beginning in a childhood largely bereft of love and stretching into the present, where Merkin lives a high-functioning life and her depression is manageable, if not “cured.” “The opposite of depression,” she writes with characteristic insight, “is not a state of unimaginable happiness . . . but a state of relative all-right-ness.”

In this dark yet vital memoir, Merkin describes not only the harrowing sorrow that she has known all her life, but also her early, redemptive love of reading and gradual emergence as a writer. Written with an acute understanding of the ways in which her condition has evolved as well as affected those around her, This Close to Happy is an utterly candid coming-to-terms with an illness that many share but few talk about, one that remains shrouded in stigma. In the words of the distinguished psychologist Carol Gilligan, “It brings a stunningly perceptive voice into the forefront of the conversation about depression, one that is both reassuring and revelatory.”


Praise For This Close to Happy: A Reckoning with Depression…

"[A] triumph on many levels . . . As insightful and beautifully written as it is brave . . . This Close to Happy earns a place among the canon of books on depression . . . books that offer comfort to fellow depressives and elucidation for those lucky enough to have dodged its scourge." —Heller McAlpin, Washington Post

DAPHANE MERKIN's writing frequently appears in The New York Times, Bookforum, Departures, Travel + Leisure, W, Vogue, Tablet Magazine, and other publications. She is a former staff writer for The New Yorker and The New York Times and a regular contributor to ELLE. Merkin has taught writing at the 92nd Street Y, Marymount College, and Hunter College. Her previous books include Enchantment, which won the Edward Lewis Wallant Award for best novel on a Jewish theme, and two collections of essays, Dreaming of Hitler and The Fame Lunches, which was a New York Times Notable Book of the Year. She lives in New York City.

1. How did the book enhance your understanding of depression? What does Daphne Merkin’s experience tell us about the impact of nature versus nurture on the psyche?

2. In chapter 4, the author writes, “The very presence of money in someone’s background tends to evoke envy and irritation . . . ‘What does she know of real suffering?’. . . and elicits a certain disbelief about the possibility of other kinds of privation.” Before reading about Merkin’s life, were you skeptical that someone from such a wealthy family could suffer such anguish?

3. As you read about Merkin’s lifetime of therapists and prescriptions, what did you make of the role of modern psychiatry?

4. In crystalline prose, Merkin describes the allure of suicide. How did you react to the logic of her thinking?

5. How did your image of Merkin’s mother shift from chapter to chapter? What fed Merkin’s fantasy that Ursula would rescue her?

6. How was Merkin affected by her emotionally aloof father, Hermann, and by watching her mother pamper him?

7. Orthodox Judaism was an integral part of Ursula and Hermann’s identity. Why did all of their children except Daphne integrate their parents’ orthodoxy into their own identities? If you had been Daphne, would you have signed Hermann’s contract, agreeing to keep kosher in exchange for a luxurious home?

8. Merkin’s mother eventually said it was a mistake to hire the abusive housekeeper Jane, though Jane lived with the Merkins for the rest of her life. How was Jane able to assert so much control?

9. How does the relationship between Merkin and her brothers and sisters relate to her depression? What determines whether siblings take care of each other or become rivals?

10. Does the fact that Merkin’s parents were refugees from Nazi Germany explain their approach to parenting, or would the household have been run the same way regardless of their tragic family history?

11. How is Zoë’s perception of the world influenced by her mother’s state of mind?

12. What enables Merkin to be such a high-functioning writer?

13. As Merkin surveyed a literary landscape populated by writers who struggled with depression (evoked by her tattered Virginia Woolf doll), what did you observe about the relationship between language and mental illness?

14. Merkin was born in the 1950s. How have attitudes about the authenticity of women evolved in American culture since then?

15. In chapter 8, Merkin recalls the psychiatrist she saw in her twenties who dug up a note that she had written as an eight-year-old patient at Columbia Presbyterian Babies’ Hospital. In the note, young Merkin says that she is afraid to go home, and she wants to know why her mother is only nice to her when she is sick. What significant truths are revealed in those words?

16. Is there evidence of Merkin’s chronic depression in her recent essay collection The Fame Lunches?