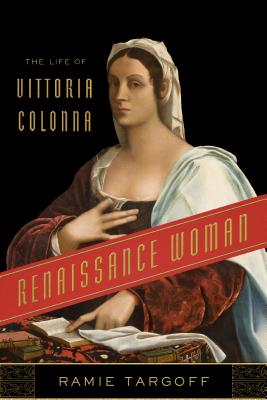 The Life of Vittoria Colonna

A biography of Vittoria Colonna, a confidante of Michelangelo, the scion of one of the most powerful families of her era, and a pivotal figure in the Italian Renaissance

Ramie Targoff’s Renaissance Woman tells of the most remarkable woman of the Italian Renaissance: Vittoria Colonna, Marchesa of Pescara. Vittoria has long been celebrated by scholars of Michelangelo as the artist’s best friend—the two of them exchanged beautiful letters, poems, and works of art that bear witness to their intimacy—but she also had close ties to Charles V, Pope Clement VII and Pope Paul III, Pietro Bembo, Baldassare Castiglione, Pietro Aretino, Queen Marguerite de Navarre, Reginald Pole, and Isabella d’Este, among others. Vittoria was the scion of an immensely powerful family in Rome during that city’s most explosively creative era. Art and literature flourished, but political and religious life were under terrific strain. Personally involved with nearly every major development of this period—through both her marriage and her own talents—Vittoria was not only a critical political actor and negotiator but also the first woman to publish a book of poems in Italy, an event that launched a revolution for Italian women’s writing. Vittoria was, in short, at the very heart of what we celebrate when we think about sixteenth-century Italy; through her story the Renaissance comes to life anew.


Praise For Renaissance Woman: The Life of Vittoria Colonna…

"Vittoria Colonna’s name has always been there, hovering in the wings, but with Ramie Targoff’s vibrant, timely study, Renaissance Woman, she comes into the spotlight...[In] Targoff’s hands the bits of [Colonna's] puzzle fit together beautifully. Here is a woman capable of deep, almost obsessional feeling, with an equal capacity to put those feelings into poetry...Vittoria Colonna has always deserved to be better known. Ramie Targoff’s fine book will surely make that happen." —Sarah Dunant, New York Times Book Review

"Ms. Targoff is adept at keeping the reader informed of the complex geopolitical machinations taking place in Colonna’s life, among them the conflict between Clement VII and Charles V, which pits her family’s loyalties against her husband’s, and the schism in the church wrought by Lutheranism. All of this is introduced not as dry context but as high drama. Working closely with Colonna’s letters and poems, Ms. Targoff gives her the vividness of a fictional protagonist."
—Cammy Brothers, The Wall Street Journal

"Targoff (Common Prayer), professor of English and cochair of Italian studies at Brandeis University, paints Vittoria Colonna (1492–1547) as an embodiment of the Italian Renaissance in this enjoyable narrative, noting Colonna’s intense religiosity and role as the first published female Italian poet . . . Targoff provides several helpful translations of Colonna’s poems, accompanied by clear explications of her struggles with mourning and spirituality, which her letters also documented . . . Targoff’s well-researched, thoughtful biography reveals Colonna as a complex woman who turned grief and a spiritual quest into a renowned literary reputation." —Publisher's Weekly

“Targoff, the author of books on John Donne, the language of devotion, and the theme of Eros and the afterlife in Renaissance English, fills a profound gap, providing the first modern biography of this remarkable person . . . Targoff’s efforts are both spritely and scholarly in this book to be enjoyed by any literate reader.” —Library Journal

“Targoff' biography shows how Colonna’s commitment to the Catholic Church intersected with her participation in cultural and political transformation.” —Booklist

“Ramie Targoff has given us an enthralling portrait of one of the most talented women of Renaissance times: the “divine” Vittoria Colonna, as she was called by her friend Michelangelo. Celebrated for her love sonnets and religious poetry, the widowed Colonna crafted a life between nunneries and the courts of her fellow aristocrats, between Protestant reformers and Catholic believers, all while fascinating some of Europe’s great figures with her presence. Ramie Targoff recreates these worlds with enormous skill and leaves us delighted with her quest.” —Natalie Zemon Davis, author of Trickster Travels: A Sixteenth-Century Muslim Between Worlds

“I was engrossed, inspired, and moved by the story of this groundbreaking, contradictory, and overlooked literary figure. Ramie Targoff brings Vittoria Colonna to life with a novelist’s flair for plot, detail, and character. Her passion for her subject is contagious, and her analysis of Renaissance culture is both scrupulous and empathetic, at once erudite and richly dramatic.” —Jhumpa Lahiri, author of In Other Words

“‘May the holy nails now be my quills,’ wrote Vittoria Colonna, Marchesa di Pescara, in one of her shattering sonnets, a profession of her dedication to the suffering of Christ through the writing of poetry. ‘And may his precious blood be my ink.’ Ramie Targoff’s learned and powerful account of the lavishly wealthy sixteenth-century Italian noblewoman who wanted to be a nun as much as she wanted to write unlocks this much-overlooked Renaissance woman from the prison of the poet’s own making—the prison of her grief—and from another prison, too: the prison of the archives, from which Renaissance Woman has at last released her.” —Jill Lepore, author of The Secret History of Wonder Woman

“One of the most glamorous women of the Renaissance, Vittoria Colonna, well-born and gifted, friend of Michelangelo, rich in every sense, has finally received the attention she deserves. No wonder it has taken so long: Vittoria’s life and career require a biographer with research skills, scholarly dedication, linguistic brilliance, wide-ranging knowledge, and writing talent—combined with a passionate interest in women’s lives—that Ramie Targoff may be alone in possessing. Many will be grateful to her for giving us so extraordinary and inspiring a heroine.” —Phyllis Rose, author of Parallel Lives

Ramie Targoff is a professor of English, the cochair of Italian studies, and the Jehuda Reinharz Director of the Mandel Center for the Humanities at Brandeis University. She is the author of Common Prayer: The Language of Public Devotion; John Donne, Body and Soul; and Posthumous Love: Eros and the Afterlife in Renaissance England. She lives with her husband and son in Cambridge, Massachusetts.
Loading...
or support indie stores by buying on
(This book is on backorder)