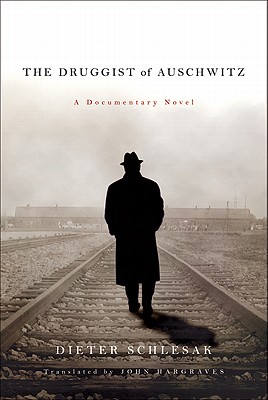 The Druggist of Auschwitz

Dieter Schlesak's haunting novel "The Druggist of Auschwitz"--beautifully translated from the German by John Hargraves--is a frighteningly vivid portrayal of the Holocaust as seen through the eyes of criminal and victim alike.

Adam, known as "the last Jew of Schaburg," recounts with disturbing clarity his imprisonment at the infamous Auschwitz concentration camp. Through Adam's fictional narrative and excerpts of actual testimony from the Frankfurt Auschwitz Trial of 1963-65, we come to learn of the true-life story of Dr. Victor Capesius, who, despite strong friendships with Jews before the war, quickly aided in and profited from their tragedy once the Nazis came to power. Interspersed with historical research and the author's face-to-face interviews with survivors, the novel follows Capesius from his assignment as the "sorter" of new arrivals at Auschwitz--deciding who will go directly to the gas chamber and who will be used for labor--through his life of lavish wealth after the war to his arrest and eventual trial.

Schlesak's seamless incorporation of factual data and testimony--woven into Adam's dreamlike remembrance of a world turned upside down--makes "The Druggist of Auschwitz "a vital and unique addition to our understanding of the Holocaust.


Praise For The Druggist of Auschwitz: A Documentary Novel…

“Like the novels of W.G. Sebald . . . [The Druggist of Auschwitz] will fill you with despair and rage and terrible shame at the infinite ingenuity of human cruelty. By steeling himself not to flinch before the hideous reality of the Holocaust, Schlesak has created a beautiful book.” —David Laskin, The Seattle Time

“That Dieter Schlesak could write this novel in what Adam calls the executioner’s language serves as some small triumph. That he could look at all of this with a clear eye and help the reader to do the same is a major triumph.” —Alan Cheuse, NPR

“A great book that hits you like a fist . . . An unforgettable tapestry of evil . . . [The Druggist of Auschwitz] shows that, as Melville said, the truth is more unthinkable than fiction.” —Claudio Magris, Corriere della Sera (Italy)

“Retracing the story of Dr. Capesius, in which appear other infamous figures—such as Josef Mengele, the ‘Angel of Death’; Fritz Klein, the ‘Assassin for Good’; and the camp commandant, Rudolf Höß—Schlesak reconstructs the terrifying history of Auschwitz: the trauma of arrival, the torture of the prisoners, the horror of the gassings and cremations. Schlesak writes with a dry style, almost with the distance of a reporter, giving us a powerful testimony on the banality of evil. The Druggist of Auschwitz is a book which confirms that sometimes the truth is more unimaginable than the most horrible fantasy.” —Gaetano Vallini, L’Osservatore Romano (Vatican City)

“Dieter Schlesak not only has created a shattering work of great literary power and authenticity . . . but also sheds light on the relationship between perpetrators and their victims.” —Claus Stephani, David: Jüdische Kulturzeitschrift (Austria)

Dieter Schlesakis a German-Romanian poet, novelist, and essayist. He is a member of the German PEN Center and the PEN Centre of German-Speaking Writers Abroad, and has received scholarships and awards from numerous organizations, including the Schiller Foundation and the University of Bucharest. Schlesak was born in Transylvania in 1934 and has lived in Italy and Germany since 1973.John Hargraveshas taught German literature at Yale University and Connecticut College. He is the author of "Music in the Works of Broch, Mann, and Kafka "and has translated works by Hermann Broch and Elias Canetti, among others. His translation of Michael Kruger's novel "The Executor "was awarded the Helen and Kurt Wolff Translator's Prize. Hargraves lives in Manhattan and Connecticut.