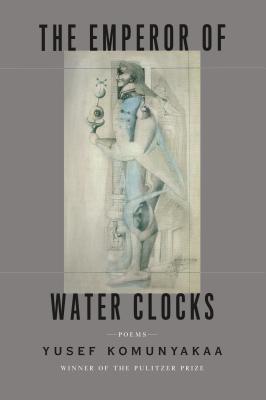 The Emperor of Water Clocks

Another brilliant collection from Pulitzer Prize winning poet Yusef Komunyakaa, who David Wojahn has called one of our "most significant and individual voices," The Emperor of Water Clocks delights, challenges, and satisfies.

"If I am not Ulysses, I am / his dear, ruthless half-brother." So announces Yusef Komunyakaa early in his lush new collection, The Emperor of Water Clocks. But Ulysses (or his half brother) is but one of the beguiling guises Komunyakaa dons over the course of this densely lyrical book. Here his speaker observes a doomed court jester; here he is with Napoleon, as the emperor "tells the doctor to cut out his heart / & send it to the empress, Marie-Louise"; here he is at the circus, observing as "The strong man presses six hundred pounds, / his muscles flexed for the woman / whose T-shirt says, these guns are loaded"; and here is just a man, placing "a few red anemones / & a sheaf of wheat" on Mahmoud Darwish's grave, reflecting on why "I'd rather die a poet / than a warrior."

Through these mutations and migrations and permutations and peregrinations there are constants: Komunyakaa's jazz-inflected rhythms; his effortlessly surreal images; his celebration of natural beauty and of love. There is also his insistent inquiry into the structures and struggles of power: not only of, say, king against jester but of man against his own desire and of the present against the pernicious influence of the past.


Praise For The Emperor of Water Clocks: Poems…

“Yusef Komunyakaa is one of our period's most significant and individual voices . . . He has a near-revelatory capacity to give himself over to his subject matter and to the taut concision of his free verse . . . Dazzling.” —David Wojahn, Poetry on Yusef Komunyakaa

“Probably my favorite living poet. No one else taught me more about how important it was to think about how words make people feel. It's not enough for people to know something is true. They have to feel it's true.” —Ta-Nehisi Coates, The New York Times Style Magazine

Praise for Emperor of Water Clocks

“The Emperor of Water Clocks is very much a movement from reverie to reverie, and an impressive work of lyric wisdom as well.”—Steve Donoghue, Open Letters Monthly

Jeff Clark was born in southern California in 1971. The author of three books of poems--The Little Door Slides Back, Arab Rab, and Sun on 6--he lives in Oakland.
Loading...
or
Not Currently Available for Direct Purchase