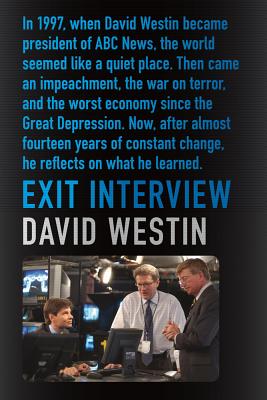 When David Westin became president of ABC News in March 1997, the division was treading water. "It looked like all the really important news was behind us," he writes. Hardly. For the next thirteen years, Westin would preside over ABC News during some of the most important and perplexing events in its history:

Conflicts in Iraq and Afghanistan

"Exit Interview "is a behind-the-scenes look at Westin's tenure and the major news that marked it. He takes us inside the chaos of the newsroom--alongside major players such as Peter Jennings, Barbara Walters, Diane Sawyer, and Bob Woodruff--where what looks clear and certain from the outside is often mired in conflict and urgency. Neither an apologia nor a critique, the book charts the ups and downs of fourteen formative years in network news, addressing basic questions about how our news is reported, from the point of view of someone who was there. With milestones from the recent past, Westin explores the uncertainty inherent in his job, and its central question: Is it possible for journalists to be both good at their jobs and people of good moral character?

“David Westin writes with vivid experience and clarity about real life on the high wire of television journalism. Each chapter is a pulse-pounding journey into a crisis—where he presided over big personalities wrestling with big decisions with serious consequences. He has written a book about triumph. Mistakes made and lessons learned. And the real reason reporters get up each day to do it all again.” —Diane Sawyer, anchor, ABC World News

“This is both a fascinating inside look at television news and a thoughtful analysis of the ethical dilemmas of journalism. David Westin writes with delightful charm about his fourteen years running ABC News and draws lessons that are enlightening not only for journalists but for everyone.”

“I watched David Westin manage ABC News at a time of tectonic change for the media—and the world we cover. Here he tells that vivid story with insight and candor, revealing the real-life trade-offs that are the daily business of television news. Exit Interview is a master class in modern journalism.” —George Stephanopoulos, chief political correspondent, ABC News

“David Westin entered the news world as an outsider and gained the trust and respect of industry veterans. Although David is never one to claim credit, this book is ultimately about leadership and a deep commitment to the best of what journalism can be today.” —Robert A. Iger, President and Chief Executive Officer, The Walt Disney Company

David Westin was president of ABC News from March 6, 1997, to December 3, 2010. He lives in Bronxville, New York.
Loading...
or
Not Currently Available for Direct Purchase