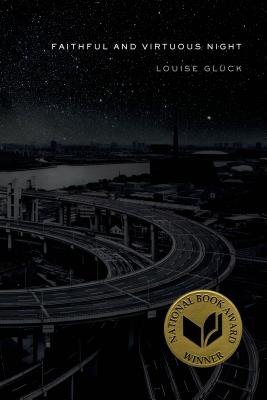 Winner of the 2014 National Book Award for Poetry

A luminous, seductive new collection from the "fearless" (The New York Times) Louise Glück, winner of the Nobel Prize in Literature

Louise Glück is one of the finest American poets at work today. Her Poems 1962–2012 was hailed as "a major event in this country's literature" in the pages of The New York Times. Every new collection is at once a deepening and a revelation. Faithful and Virtuous Night is no exception.

You enter the world of this spellbinding book through one of its many dreamlike portals, and each time you enter it's the same place but it has been arranged differently. You were a woman. You were a man. This is a story of adventure, an encounter with the unknown, a knight's undaunted journey into the kingdom of death; this is a story of the world you've always known, that first primer where "on page three a dog appeared, on page five a ball" and every familiar facet has been made to shimmer like the contours of a dream, "the dog float[ing] into the sky to join the ball." Faithful and Virtuous Night tells a single story but the parts are mutable, the great sweep of its narrative mysterious and fateful, heartbreaking and charged with wonder.

“One reason Glück has proved so central to American poetry, for five decades now, lies in her remarkable talent for recapturing wonder. For all her disabused austerity, she remains a great poet of renewal . . . What makes Glück's latest collection, Faithful and Virtuous Night, so powerful is the inventiveness with which the poet responds not only to her own mortality, but to the entirely new vantage on the world that her predicament affords . . . Reading these poems, one feels that all the resources Glück has developed up until now have been brought to bear, and yet, even more impressively, that she has demanded of herself new and surprising methods . . . This is what makes Faithful and Virtuous Night so moving: Even as she admits that our forms of knowledge, the stories with which we understand the world and ourselves, are contingent and flawed, Glück suggests such stories are no less necessary or real. There's not a hint of easy consolation, much less any 'triumph of the human spirit' in this book. But neither does the abiding darkness entail despair . . . The high art and deep pleasure of Faithful and Virtuous Night derive from . . . moments of startling presence, when everyday facts turn magical, when disenchantment itself leads to renewed enchantment. It is a great good fortune to hold these poems in hand.” —Peter Campion, The New York Times Book Review

“Shifting between prosaic passages and her more familiar lyric investigations of family, loss, and time's tide, Glück's new collection of poems finds cinematic scope through a deeply personal lens. Moving and rich, her mastery of what she knows is matched only by her ease with the uncertain. 'A word drops into the mist,' she writes, 'like a child's ball into high grass.'” —Michael Andor Brodeur, The Boston Globe

“We go to Glück, as to all great poets, for what Frost called a 'clarification of life,' but, like Frost, whom she resembles in no other way, Glück wants the clarification without sacrificing the doubt. To do this, both poets make their revealed wisdom radically contingent upon circumstance. Nothing is final; certainty is an illusion. And so we find in Glück's work, as in Frost's, the temptation to truth tempered by the awareness of context.” —Dan Chiasson, The New Yorker

“Louise Glück just keeps getting better. One of our finest contemporary poets--as her collected poems showed two years ago--she has changed her aesthetic strategy over the years, moving away from adaptations of Greek and Roman myths toward a new oracular tone of her own. The result is brilliant and haunting, captivating and mysterious, but, as always, couched in spare, emotionally charged diction . . . In Faithful and Virtuous Night, her 13th collection, Glück writes with a timeless quality, perched on the edge of expectation, awaiting a revelation through the mist, a signal in the capacious night. Her richness of thought and restrained, melancholy voice call forth the rhythms of the broken heart: beating valiantly in quiet desolation. She is the lost pilgrim, unsure whether the still, small pinnacle of her experience is a peak or plateau.” —Arlice Davenport, Wichita Eagle

Louise Glück is the author of two collections of essays and more than a dozen books of poems. Her many awards include the 2020 Nobel Prize in Literature, the 2015 National Humanities Medal, the 1993 Pulitzer Prize for The Wild Iris, the 2014 National Book Award for Faithful and Virtuous Night, the 1985 National Book Critics Circle Award for The Triumph of Achilles, the 2001 Bollingen Prize, the 2012 Los Angeles Times Book Prize for Poems: 1962-2012, and the 2008 Wallace Stevens Award from the Academy of American Poets. She teaches at Yale University and Stanford University and lives in Cambridge, Massachusetts.
Loading...
or support indie stores by buying on
(This book is on backorder)