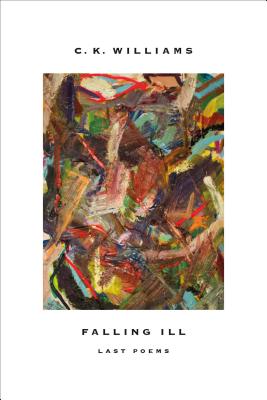 A capstone to an unforgettable career

Over the past half century, the great shape-shifting poet C. K. Williams took upon himself the poet’s task: to record with candor and ardor “the burden of being alive.” In Falling Ill, his final volume of poems, he brings this task to its conclusion, bearing witness to a restless mind’s encounter with the brute fact of the body’s decay, the spirit’s erasure.

Written with unsparing lyricism and relentless discursive logic, these brave poems face unflinchingly “the dreadful edge of a precipice” where a futureless future stares back. Urgent, unpunctuated, headlong, vertiginous, they race against time to trace the sinuous, startling twists and turns of consciousness. All is coming apart, taken away, except the brilliant art to describe it as the end is coming. All along is the reassurance of love’s close presence.

Here are no easy resolutions, false consolations. Like unanswered prayers, they are poems of deep interrogation—a dialogue between the agonized “I” in its harrowing here-and-nowness and the elusive “you” of the beloved who flickers achingly just out of reach.

Williams’s Falling Ill takes its place among the enduring works of literature about death and departure.

C. K. Williams (1936–2015) published twenty-two books of poetry including, Flesh and Blood, which won the National Book Critics Circle Award; Repair, which won the Pulitzer Prize in Poetry; and The Singing, winner of the National Book Award. Williams was awarded the Ruth Lilly Poetry Prize in 2005. He wrote a critical study, On Whitman; a memoir, Misgivings; and two books of essays, Poetry and Consciousness and In Time: Poets, Poems,and the Rest.

"Falling Ill, if you let it happen, is likely to harrow and haunt you. Like all [Williams's] poetry, it tells the truth as near as it can come . . . [The poems'] lack of punctuation lends them an air of nakedness, vulnerability, terror, tumbling forward . . . Down to its final, unbearable explosion of love, this book holds the wavering mirror steady. Many poets have gone out writing poems, but few have been such a poet." —John Timpane, The Philadelphia Inquirer
or
Not Currently Available for Direct Purchase
Copyright © 2020 American Booksellers Association