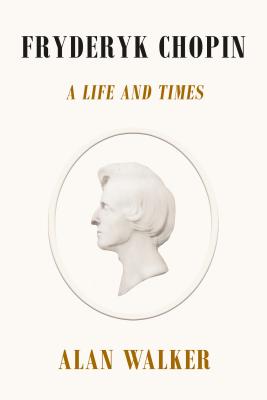 A Life and Times

A New York Times Book Review Editors' Choice. The Sunday Times (U.K.) Classical Music Book of 2018 and one of The Economist's Best Books of 2018.

Based on ten years of research and a vast cache of primary sources located in archives in Warsaw, Paris, London, New York, and Washington, D.C., Alan Walker’s monumental Fryderyk Chopin: A Life and Times is the most comprehensive biography of the great Polish composer to appear in English in more than a century. Walker’s work is a corrective biography, intended to dispel the many myths and legends that continue to surround Chopin. Fryderyk Chopin is an intimate look into a dramatic life; of particular focus are Chopin’s childhood and youth in Poland, which are brought into line with the latest scholarly findings, and Chopin’s romantic life with George Sand, with whom he lived for nine years.

Comprehensive and engaging, and written in highly readable prose, the biography wears its scholarship lightly: this is a book suited as much for the professional pianist as it is for the casual music lover. Just as he did in his definitive biography of Liszt, Walker illuminates Chopin and his music with unprecedented clarity in this magisterial biography, bringing to life one of the nineteenth century’s most confounding, beloved, and legendary artists.

Dr. Alan Walker has written extensively on Franz Liszt, and his definitive three volume biography of Liszt, Franz Liszt, published by Knopf, received awards including the James Tait Black Memorial Prize in Biography and the Royal Philharmonic Society Book Award. His writing has appeared in journals such as The Musical Quarterly, Times Literary Supplement and Times Educational Supplement. A Professor Emeritus at McMaster University since 1995, Dr. Walker was made a Fellow of the Royal Society of Canada in 1986 and was awarded the Knight’s Cross of the Order of Merit of the Republic of Hungary in 2012.

Praise For Fryderyk Chopin: A Life and Times…

"For a biographer, there's a lot to untangle. Alan Walker does so brilliantly in Fryderyk Chopin: A Life and Times, a magisterial portrait . . . A polyphonic work that elegantly interweaves multiple strands." --Corinna da Fonseca-Wollheim, The New York Times Book Review

"An ideal composer biography should combine several qualities: a deep knowledge of the artist’s life and milieu, fortified by a reexamination of all available sources; an intimate understanding of the composer’s personality (and, when possible, some affection for it, too); and an ability to speak of the creative work in a manner that will edify both scholars and the general public, and take us all back to the music. Alan Walker’s Fryderyk Chopin: A Life and Times manages this hat trick very well indeed . . . This is now the best biography of Chopin — meticulous, scholarly and well-told." --Tim Page, The Washington Post

"There is more than enough for everyone at this literary feast, and come awards time, it’s likely you’ll see this book short-listed for one of the top literary biographies of the year . . . Walker’s narrative style reflects the very music of his subject: He has a light, delicate touch when making apt inferences, and a soft and rather ornate style when providing descriptions of the artist . . . Walker remains faithful to his subject, which only 10 years of extensive research into vast archives of primary source material could manifest." --Richard Horan, Christian Science Monitor

"At last, the definitive biography of Chopin has arrived. This substantial new study is a masterpiece, indispensable to specialists and general music lovers alike. It overflows with revelatory information, deft characterisation and pertinent, readable explorations of the music. All this is set against a minutely detailed depiction of his world. Walker’s style is elegant, literary and empathetic, while his unfailing love for the music shines from every page." --Sunday Times (U.K.)

"Thorough and authoritative . . . Walker [writes] with the narrative expertise one would expect of the masterly biographer of Liszt . . . Walker is brilliant on piano technique and its musical consequences. These passages are like talk of pigment and brushstrokes in a book about painting: technical in a sense yet free of jargon, easily understood, even perhaps by someone who has never laid hand on a piano keyboard." --Stephen Walsh, The Guardian

"Absorbing . . . Walker integrates [many] different aspects into an entirely convincing entity. It's a measure of Walker's achievement that even in such a lengthy book, he keeps the reader engaged, presenting accessible and illuminating comments backed up with the full weight of scholarly authority." --Erik Levi, BBC Music (five stars)

"[Alan Walker has] shed new light on many aspects of Chopin's life and cleared away a thicket of myths . . . Scrupulous as it is, this monumental biography is deeply engaging and enjoyable." --The Economist

"Not one paragraph of this meticulously researched and often poignant account is wasted."--Andrew Moravcsik, Foreign Affairs

"A real landmark. For the 'casual' music-lover it contains peerless writing; for the scholar, scotched myths and startling discoveries; and for the musician, insights galore . . . Walker leaves no stone unturned in his search for the truth about Chopin's life. Full of vivid detail, it is a perceptive chronicle through which one seems to live the composer's life alongside him . . . [Fryderyk Chopin] is the most important biography of Chopin in years and will be treasured by musicians and music-lovers as the definitive life for many more." --Jessica Duchen, Sunday Times (U.K.)

"Alan Walker has produced the most comprehensive biography and musical analysis to date on Poland's most famous musician and composer . . . Highly readable and engaging . . . [Fryderyk Chopin] brings to life one of the 19th century's and Poland's most beloved, legendary, and celebrated artists. It deserves a place of merit at every university, music, and school library." --Carol Katz, New York Journal of Books

"[An] expansive, authoritative biography . . . Packed with information and insightful analyses of Chopin’s major works that will interest professional musicians, and even nonspecialists will be entranced by [Alan] Walker’s piquant storytelling and graceful prose." —Publishers Weekly (starred review)

"Walker, whose writing is as limpid and engaging as his subject’s music, punctuates a rich texture of biography and history with discussions of Chopin’s technical and compositional innovations and distinctions that neatly show why he is so highly regarded . . . Informed by the latest discoveries about the composer, Walker’s
biography is a towering and beautiful achievement." —Booklist (starred review)

“[Fryderyk Chopin] is sure to become the definitive biography on the great composer . . . General readers should find this accessible as well as engrossing." —Library Journal (starred review)

“Adopting the same combination of broad perspective, wealth of telling detail, and musical expertise that he brought to his classic biography of Franz Liszt, Alan Walker has now produced a vast work on Fryderyk Chopin that is likely to remain the most important account of the great Polish master’s life for a long time to come. Walker vividly recounts Chopin’s happy childhood and youth in Warsaw, his unfortunate but artistically prolific adult life in exile from his native country, his loves, and his losing battle with the tuberculosis that killed him at the age of thirty-nine. The book also delves deeply into Chopin’s music. A must for musicians and music-lovers alike.” —Harvey Sachs, author of Toscanini: Musician of Conscience