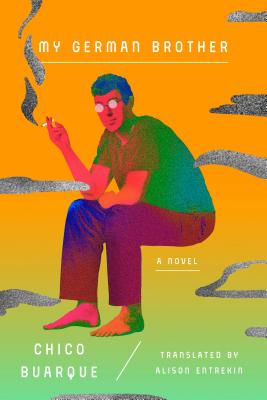 An uproarious novel about a man’s often sordid, lifelong search for his possibly imaginary half brother

My German Brother is the renowned Brazilian musician and author Chico Buarque’s attempt to reconstruct through fiction his obsessive lifelong search for a lost sibling.

In 1960s São Paulo, the teenage car thief and budding lothario Ciccio comes home each day to a house stuffed with books. His father, a journalist and scholar, has spent his life acquiring them; his mother, by necessity, has spent her life organizing this library. Ciccio feels like an afterthought in his own family, largely left to his own criminal devices. Forbidden to touch any of these books, Ciccio sneaks off with The Golden Bough one day to discover a decades-old letter hidden inside. The letter reveals an illicit affair his father carried on while posted in Nazi-era Berlin, an affair that resulted in the birth of a baby boy. The child, along with his mother, vanished into the chaos of the Second World War. Ciccio develops a fascination for his mysterious German brother: a fixation that becomes a mission, both comical and courageous, pursued over decades, through dead ends and embarrassments and cases of mistaken identity.

My German Brother is the project of a lifetime, combining what was, what might have been, and outright fabrication, all in order to arrive at the truth.


Praise For My German Brother: A Novel…

"Chico Buarque, Brazilian pop legend and one of the founders of Tropicalismo, has developed into an intriguing and inventive novelist as well . . . The language of My German Brother is musical and serpentine, as he unravels a tale that is part historical mystery, part intellectual and sexual coming-of-age." —Anderson Tepper, Vanity Fair

"A fascinating, shape-shifting piece of autofiction . . . There’s more than a whiff of Sebald to this potent, meandering mixture of text and image, fact and fiction." —Luiza Sauma, The Telegraph

"[A] wistful novel . . . Moving . . . [A] poignant exploration of the past that lies tucked away between the pages of musty books." —Kirkus

Chico Buarque was born in Rio de Janeiro, Brazil in 1944. He is a legendary singer and songwriter, as well as the author of novels, plays, and screenplays. His books include Spilt Milk and Budapest.
Loading...
or
Not Currently Available for Direct Purchase