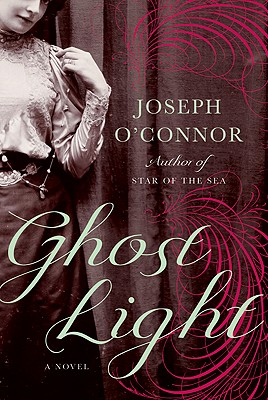 “Occasionally, a novel will come along that breaks the bounds between fact and fiction, romance and reality, to create a story so insightful and true that the scenes come to life before your eyes. Ghost Light is the fictionalized account of the famed Irish playwright J.M. Synge and his lover, the actress Maire O'Neill. Alternating with the Dublin tableaux is the tale of Maire's later life as a poverty-stricken alcoholic in 1952 London, where she haunted by the memories of both her days with Synge and her acting career, and struggling to make her way, day by day. Bravo!”
— Carl Hoffman, Boswell Book Company, Milwaukee, WI
View the List

1907 Edwardian Dublin, a city of whispers and rumors. At the Abbey Theatre W. B. Yeats is working with the talented John Synge, his resident playwright. It is here that Synge, the author of The Playboy of the Western World and The Tinker’s Wedding, will meet an actress still in her teens named Molly Allgood. Rebellious, irreverent, beautiful, flirtatious, Molly is a girl of the inner-city tenements, dreaming of stardom in America. Witty and watchful, she has dozens of admirers, but it is the damaged older playwright who is her secret passion despite the barriers of age, class, education, and religion.

Synge is a troubled, reticent genius, the son of a once prosperous landowning family, a poet of fiery language and tempestuous passions. Yet his life is hampered by conventions and by the austere and God-fearing mother with whom he lives. Scarred by a childhood of immense loneliness and severity, he has long been ill, but he loves to walk the wild places of Ireland. The affair, sternly opposed by friends and family, is turbulent, sometimes cruel, and often tender.

1950s postwar London, an old woman walks across the city in the wake of a hurricane. As she wanders past bomb sites and through the forlorn beauty of wrecked terraces and wintry parks, her mind drifts in and out of the present as she remembers her life’s great love, her once dazzling career, and her travels in America. Vivid and beautifully written, Molly’s swirling, fractured narrative moves from Dublin to London via New York with luminous language and raw feeling. Ghost Light is a story of great sadness and joy—a tour de force from the widely acclaimed and bestselling author of Star of the Sea.

“A great ambitious novel about love and loss. Joseph O’Connor has the magic touch, and I can’t imagine many better—or braver—novels coming out this year.” —Colum McCann, author of Let the Great World Spin


“When I think of Ghost Light, the words climb over each other to be first in the queue: brilliant, beautiful, exhilarating, heartbreaking, masterly. It’s that good.” —Roddy Doyle, author of Paddy Clarke Ha Ha Ha

“It has an astonishing command of voice and period detail, and offers an intimacy with the lives of others that is rare in fiction.” —Colm Tóibín, author of Brooklyn

“Ghost Light is a tender and compassionate love story, and a fine stepping stone to the majesty of Synge.” —Times Literary Supplement

“Remarkable, radiant and captivating . . . On top of the biographical information concerning these two, Synge and his Molly, Joseph O’Connor has imposed a fictional overlay, and makes a vivid performance of it . . . Deeply and resolutely imagined, Ghost Light casts its heroine as a charming and robust, playful and wayward young girl, committed to the well-being of the rather difficult and gloomy JM Synge. Molly Allgood, in this version, has a good deal of Molly Bloom in her make-up, and a lively intelligence to boot . . . In this incarnation, [she] is a figure of great gaiety and aplomb; and O’Connor’s novel carries all the pungency and resonance of a particular era of the past.” —Patricoa Craig, The Independent

“A moving tale.” —The Sunday Telegraph

“An entertaining read that carries a touching tale.” —The Economist

“Masterful . . . With his previous novels, Star of the Sea and Redemption Falls, O’Connor carved out a unique way of playing his storyteller’s hand over a wide landscape, with the use of invented documentation and textual adventure. Ghost Light brings that achievement to a new dimension, more specifically located and yet all the more masterful in its management of re-imagined lives and the time they inhabit . . . The writing is lyrical and moving.’ —Hugo Hamilton, The Financial Times

“With his usual deftness and intelligence, O’Connor brings to life the intense love affair between young actress Molly Allgood and the great Irish playwright JM Synge . . . Brilliant.” —The Daily Mirror

“Joseph O’Connor’s seventh novel, Ghost Light, will give days of pleasure to tens and tens of thousands of readers. It is a great love story, with extras: a virtuoso display of literary talent, a tribute to the Hiberno-English heritage of lore and lyricism and an interpretation of the Irish literary revival as the fruit of settler and native, Protestant and Catholic . . . One of the novel’s great achievements is not just to display imaginative power but also to show how the imagination works . . . A stroke of genius.” —Adrian Frazier, Irish Times

“Engrossing stuff . . . Beautifully written and charming.” —The Independent on Sunday

“What shines in the end is O’Connor’s precise style bolstered by quick flashes of his wicked humour. Ghost Light is a careful, thoughtful story, the worlds of which are impeccably rendered.” —Irish Examiner

“Ghost Light is a sad and stirring story of love and loss, and O’Connor skillfully brings to life a brief affair that burned brightly and for Molly, was never extinguished.” —Claire O’Mahony, Irish Sunday Tribune

“O’Connor has fashioned a deeply moving, beautifully written story . . . Admirers of his writing will take pleasure not only in the ambitious range of Ghost Light and its depth of feeling but also in the nods in the direction of the author’s immediately preceding novels, Redemption Falls, and, before that, Star of the Sea . . . Ghost Light stands up to scrutiny on its own terms. It is a profoundly sad story, but triumphant.” —Scotland Herald

“The author displays typical imaginative virtuosity and emotional depth . . . As well as being impressively well crafted, the novel is wreathed in language of Joycean richness. [O’Connor’s] prose is tuned to a singular lyrical frequency.” —The Sunday Times

“Ghost Light is a spirited novel . . . Like her namesake Molly Bloom, Allgood is an earthy, wily and sexually magnetic creation but O’Connor’s real feat is in his careful deployment of Hiberno-English by which he not only doffs his cap to Synge but gives flesh and blood to Molly’s neglected life story.” —The Metro

“Ghost Light will give days of pleasure to tens and tens of thousands of readers. It is a great love story, with extras: a virtuoso display of literary talent, a tribute to the Hiberno-English heritage of lore and lyricism and an interpretation of the Irish literary revival as the fruit of settler and native, Protestant and Catholic . . . Brimming with sympathy and skill.” —Irish Times

“Joe O’Connor occupies a special place in Irish life. The novel is artfully constructed . . . O’Connor’s evocation of such a difficult, morbid and yet morally beautiful man through the memory of an earthy and vivacious woman is remarkably ambitious and imaginative. Ghost Light is full of . . . sly pleasures and there is a great deal of broad comedy.” —The Irish Independent

“Lyrical and moving.” —The Sunday Tribune

Joseph O'Connor was born in Dublin. His books include six previous novels: "Cowboys and Indians "(short"-"listed for the Whitbread Prize), "Desperadoes," "The Salesman," "Inishowen," "Star of the Sea," and "Redemption"" Falls." "Star of the Sea "became an international bestseller, winning the Irish Post Award for Literature, and France's Prix Millepages, Italy's Premio Acerbi, and the Prix Madeleine Zepter for European Novel of the Year. His work has been published in thirty"-"five languages.
Loading...
or
Not Currently Available for Direct Purchase